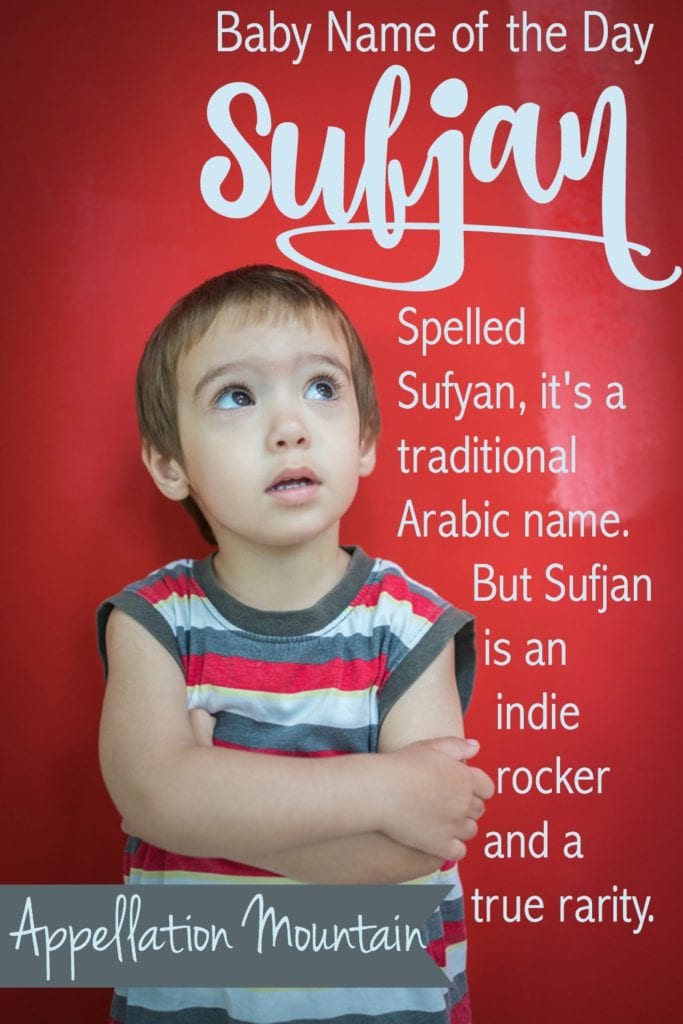 Sufjan was first heard as a name in the US thanks to an influential indie rocker.

Thanks to Sierra for suggesting our Baby Name of the Day.

Even if Sufjan was brand new to most American English speakers, the name has deep roots.

There’s more than one theory for the name’s meaning:

The Armenian one is the most often repeated – more on that in a minute.

Way back in the 600s, there was a tribal leader named Abu Sufyan. He initially opposed Muhammad, the founder of Islam, but ultimately became a convert. Abu Sufyan later served as a military leader for Muhammad.

As for pronunciation, the Sufyan spelling is pretty close to phonetic: SOOF yahn. The ‘j’ version might cause a little bit of confusion.

But for many Americans, this name is just another rarity worn by an indie rocker, sort of like Rufus Wainwright.

Stevens first attracted attention in 2000 with an album called A Sun Came, and then 2005’s Illinois.

His first name puzzled me. In interviews, the musician has referred to his given name as Armenian.

Was Stevens Arabic? He’s from Detroit, and Michigan is home to a significant Arab-American population. And his father’s name is Rasjid, so I assumed yes.

It turns out that Stevens’ parents were part of the Subud spiritual movement with roots in the east. It’s not exactly a religion, but it must have been a big influence in their lives, because Sufjan was named by the leader of their group.

Stevens has siblings with even more distinctive names: brother Marzuki and sister Djohariah.

Sufjan: By the Numbers

A handful of boys have been given this name, but almost certainly thanks to their parents’ heritage, rather than the indie rocker.

But with the -jan spelling? There are too few to register as even a blip on the US Social Security Administration records.

If you’re a fan of Stevens’ music, it’s possible that you might consider this name. After all, plenty of kids are called Lennon and Hendrix and Marley.

And yet, it feels a little bit like the kind of name you’d find on Hello, My Name is Pabst. Except that the names on that site seem slightly less surprising than Sufjan.

This leaves me with two take-aways:

Let’s call Sufyan an appealing heritage choice, and Sufjan a bold possibility for parents who don’t mind answering questions about their love of indie rock.

Would you consider Sufjan for a son?