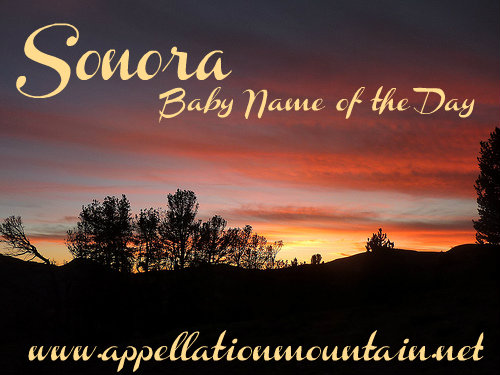 It’s a pleasant place name with quite the tale to tell.

Thanks to Emily for suggesting Sonora as our Baby Name of the Day.

Sonora sounds like a given name, doesn’t it?  Somewhere between Nora and Sophia, with a healthy dose of modern innovations like Sienna.

It’s originally a  place name in northwestern Mexico on the Gulf of California.  There’s plenty of speculation about where Sonora comes from, but the most common theories are all connected to the Virgin Mary.  That’s Nuestra Señora, Our Lady, in Spanish, the language spoken by early settlers.  Local languages whispered Señora down the alley to Sonora over time, and it stuck …

Or maybe not.  It could be related to a word from one of the indigenous languages, though something about the Sonora story has the ring of truth.  As for the idea that it is related to the word sonorous?  Probably not.  The place name predates the use of the adjective.

By 1540, Coronado referred to the area as Valle de La Sonora.  All these years later, Sonora it remains.

There’s nothing surprising in the story so far, and it isn’t even a shocker that a California town borrowed the name and a desert spanning the region is known as the Sonoran.

What happens next is my favorite part.

Juan Francisco de la Bodega y Quadra was a Peru-born Spanish navigator and naval officer assigned to an expedition to explore the Pacific Coast until they made contact with the Russians.  (Hey, this was the sixteenth century.)  Juan was second in charge, but when the commander decided to give up, he pushed on, reaching Alaska.  Juan’s schooner was named the Nuestra Señora de Guadalupe, or just Sonora.

As the expedition made its way up the coast, the name Sonora spread.  There’s Sonora Reef in Washington and Sonora Island in British Columbia.  And that’s just to name two.

But Sonora’s migration to given name status has yet another twist.

This almost certainly is due to Georgia native Sonora Webster Carver, a horse diver.

Easy.  All you have to do is mount a running horse as it nears the top of a 40-foot (or more) platform and then stay on the horse as it dives – yes, dives – into a pool of water as many feet down as it had gone up.

Sonora Webster Carver is the best known of all horse divers, a sensation in her day and headline act at Atlantic City’s Steel Pier.  The wildest part of the story?  In 1931, she hit the water off-balance and was blinded.  It didn’t stop her, though.  Without revealing her injury, Carver continued to dive for eleven more years.  Her autobiography was adapted for the big screen in 1991’s Wild Hearts Can’t Be Broken.

Carver wasn’t the first to wear the name, though.  Sonora Smart Dodd was the organizing force behind the establishment of Father’s Day, and she was born back in 1882.

History aside, Sonora feels modern and fresh, an unexpected place name, a cowgirl name to pair with brothers called Wyatt and Cash.