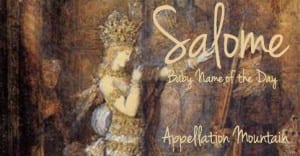 Today’s name has a reputation as a Biblical bad girl, but maybe that’s all a great big misunderstanding.

Thanks to Virginia for suggesting Salome as our Baby Name of the Day.

This name starts out strong. It’s from an Aramaic name, one that comes from the Hebrew word shalom – used as a greeting, but literally meaning peace.

That should put Salome in the company of Pax, Paloma, and Dove. But this name’s story quickly takes a different turn.

In the New Testament, King Herod marries Herodias, who had previously been married to Herod’s brother. John the Baptist condemned the marriage as incest, angering Herodias.

The king was inclined to let it slide, but Herodias? Not so much. She sends her daughter to dance for her stepfather. And when her stepfather offers her anything she’d like as compensation?

Herodias’ daughter demands the head of John the Baptist on a platter.

The New Testament leaves the daughter nameless, but the historian Josephus calls her Salome. We’ve been blaming her for the untimely demise of the saint ever since.

There are lots of problems with the story, but we do know that many of the people mentioned were historic, including Salome. Whether she was the dancing daughter or not, Salome married twice and became queen of Chalcis and Asia Minor.

But it’s the story we remember, often retold in the arts. That’s Theda Bara, one of many actresses to play the temptress on the silver screen.

Richard Strauss turned Wilde’s work into an opera, again featuring the dancer as a temptress. It debuted in Dresden in 1905, but her dance – now the tantalizing Dance of the Seven Veils – was considered so scandalous that it was banned in Vienna until 1918. It debuted in New York in 1907, but the run was cut short by outraged audiences. 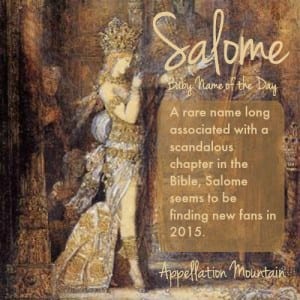 Despite all of this noise, the name has been used occasionally. There’s actually another Salome in the New Testament – a witness to the crucifixion.

Agatha Christie also used the name for a not-very-nice character in her 1937 novel Death on the Nile, and it’s the role deluded Norma Desmond thinks she’s going to play in the 1950 classic Sunset Boulevard.

In True Blood, Salome Agrippa is a vampire version of the original dancing princess, and she’s quite evil.

Salome: How do you say?

Perhaps some of parents’ hesitation isn’t about the daring dancer, but about the name’s pronunciation.

I’ve heard sal OH may and – most often – sal oh MAY. But arguments abound, and some say that it is just too close to salami to consider.

It reminds me of Sallie Mae – and yet, I think the sound is pleasing, especially in our age of Penelope.

Salome: On the Rise

English actress Alex Kingston named her daughter Salome Violetta in 2001. The name has been in the Top 100 in France in recent years, too.

Is Salome redeemed? It’s still a daring choice, but one that could be headed for the mainstream.

Is Salome too scandalous to use for a daughter? Do you think the pronunciation is problematic?