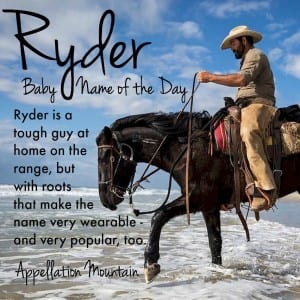 Thanks to Jen for suggesting Ryder as our Baby Name of the Day.

At first glance, this name looks a little nouveau – a brother for Jaxon or Kayden.

But Ryder has roots. A rider was one who rode a horse into a battle – a knight, though that word wouldn’t enter English until after the Norman invasion. So Ryder beings as a surname name for a mounted warrior. Or possibly for a messenger who travelled by horse.

The German Reiter shares the same roots. And while the -ider spelling is slightly more common, there are good reasons why the -yder version might feel more familiar.

It might be that cowboy cool that boosted Ryder in the first place. 1960 was the first year Ryder was given to more than five boys. Westerns were huge in the era, from The Lone Ranger to Gunsmoke.

Ryder’s next big jump was in 1994, the first year it was given to more than 100 boys. Could actress Winona Ryder get the credit? She was the height of her popularity, starring in Reality Bites the same year.

The name picks up on so many trends:

Today, Ryder feels like it could become a modern staple – not as traditional as Robert or even Ryan, but a wearable, current name for a boy.