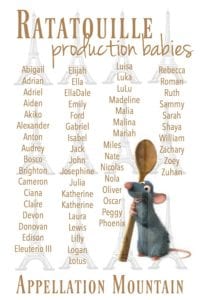 I’m not much of a chef, but Ratatouille remains one of my favorite Disney-Pixar movies of all time. With all this recent talk of Remy, it got me thinking – had I ever covered the full list of Ratatouille production babies?

Nope! The movie came out way back in 2007 – ten years ago – and yet, some of the names feel every bit as surprising as they would have a decade ago. When it comes to creating animated classics and naming babies, creativity abounds!

Let’s take a look at the Ratatouille production babies.

On the girls’ side, we find traditional names like Abigail, Audrey, Claire, Ella, Emily, Isabel, and Madeline. They’re popular in recent years, but also rather stylish.

Names like Aiden, Cameron, Devon, Donovan, Logan, and Roman might not have been familiar one hundred years ago. But they feel very familiar in recent years. They’re not exactly classics, but they’ve become solid, go-to choices for a child.

On the girls’ side, Zoey appeared – one of three Z names! There’s also Mariah, a name that feels like it might be antique, but actually owes its popularity to singer Mariah Carey. (Mariah existed ages before Miss Carey’s “Vision of Love” hit Number One. But back then, we pronounced it exactly like Maria.)

Production baby names sometimes include mainstream favorites, but they also list evergreen choices like William, Lewis, John, and Nicolas for boys, plus Sarah, Josephine, Lilly, and Katherine – twice! – for girls.

Girls’ names also included Julia, Laura, and Rebecca. I’m never sure if these are true classics or traditional favorites or something else entirely.

Gabriel and Elijah qualify as traditional favorites, but they’re also clearly Biblical boy choices, a category many parents have embraced.

Adriel belongs to that category, too, a rarity that first appeared in the US Top 1000 in the twenty-first century.

I’m not sure about the origin of Zuhan, but it seems to fit here, too.

Malina might be a American innovation, or it could be a Slavic – or Scottish – heritage choice, since the name is found in both parts of Europe.

In much of Europe, Anton ranks comfortably in the Top 100. But it’s relatively rare in the US, where it last made the Top 500 back in the 1930s.

Luisa is used in Spanish and Italian, but wears nicely in the US, too.

Then there’s Malia. Strictly speaking, it’s Hawaiian – not really an import – but it does come from a different language and cultural tradition.

Jack feels both classic and casual, so I’ve included him here. So does Nate, a name that has never cracked the US Top 1000, though surely plenty of Nathans and Nathaniels answer to it.

And then there’s Sammy – not Samuel! (Or, I suppose, Samantha.)

For the girls, there’s a LuLu, no formal name required. Nola also fits with the mini names trend.

Ratatouille Production Babies: Ahead of the Curve

They’re rising favorites now, but in the years leading up to Ratatouille’s 2007 release, they were quite rare. There’s Ford, now a Top 1000 name. Flower name Lotus seems to fit here, too. So does Phoenix, a unisex choice given to boys and girls in big numbers by 2007 – but even bigger numbers since then.

A few Ratatouille production babies names almost fit in the Ahead of the Curve category, but they strike me as delightfully retro.

Ratatouille Production Babies: Everything Else Under the Sun

Ciana might be a modern invention, or it could be borrowed from Ireland or from opera. It sounds right at home in the 21st century.

Likewise, Shaya claims more than one possible origin – or might be a good ol’ creation based on popular sounds.

I might have put Eleuterio on the international names list. After all, it’s a romance language spin on a Greek name meaning free. Except. He’s Eleuterio III, which makes this big, bold, imported name seem even more intriguing.

Smoosh name EllaDale also surprises – not Top 100 Ella, of course, but the second part of the name.

What are your favorite Ratatouille production babies names?