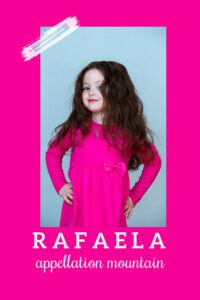 The baby name Rafaela shares the stylish -ella ending sound of so many chart-toppers. Yet this one fails to crack the current US Top 1000 in any spelling. Could this be the undiscovered gem so many parents seek?

Thanks to Rebecca for suggesting our Baby Name of the Day and to Corinne for requesting an update.

The name Raphael means “God has healed,” and in the Book of Tobit, he gives sight to a blind man.

Tradition makes Raphael an angel, across Christianity, Judaism, and Islam.

Raphael is considered a Catholic saint, the protector of travelers, among other things. And plenty of writers have included Raphael in their works, from John Milton in Paradise Lost, to television’s Supernatural.

Renaissance master Raphael remains widely known, as does the Teenage Mutant Ninja Turtle named for him.

That’s plenty of history and pop culture for one name, so no surprise that Raphael appears in the US Top 1000 pretty much every single year.

So does the Spanish, German, sometimes Slavic spelling Rafael. In recent years, the Rafael spelling is significantly more popular than Raphael.

But despite the success of the masculine versions, the baby name Rafaela remains rare.

At least, the baby name Rafaela is rare in the US.

Elsewhere, particularly in the Spanish and Portuguese-speaking world, Rafaela is far more familiar.

Back in the 1970s, a Venezuelan telenovela centered on the life of a character by the name; in 2011, Mexican television rebooted the series, now starring Scarlet Ortiz in the title role.

Plenty of English-Spanish crossover names hit it big thanks to telenovelas. In the year 2000, just 20 girls received the name. That number spiked in 2011 to 60 births – possibly thanks to the television series. But it didn’t last. By 2020, just 47 newborn Rafaelas arrived in the US.

None of the alternate spellings fare any better. As of 2020:

Tally up all of the spellings, and the name still remains far beyond the US Top 1000.

So no one is using the baby name Rafaela in the US. That could be a great opportunity.

It comes with nicknames galore. There’s the boyish Rafi and Rafa, as well as more conventional Ella, Ellie, and Elle. Rella, Rae, and Fae all seem like contenders.

And the overall sound has the same romantic appeal as Isabella and Lucia, Ariana and Camila.

This makes the baby name Rafaela a romance language option that feels familiar, while remaining undiscovered. A handful of athletes, a character from a Japanese magna, and a nineteenth-century saint all answer to the name, too.

But the baby name Rafaela is more than a flowing, romantic rarity.

Back in the 1700s, a young woman named Rafaela de Herrera y Torreynosa was born into a military family. She paid attention to all things strategic. This knowledge came in handy in 1762, when she was a mere 19 years old.

Her dad commanded the garrison a fortress on the San Juan River in Nicaragua. It was a critical spot for trade routes and access to the Pacific, and so the British came calling with 2,000 soldiers.

The garrison contained just 100 men, and Herrera’s dad? He was on his deathbed. The second-in-command considered surrender, but Herrera vowed to defend the Fortress with her life, and inspired the soldiers.

Herrera fired the canon that killed the British commander herself.

She relied on clever tactics, too, like soaking sheets in alcohol, setting them on fire, and launching them towards the British ships.

Her story adds a fascinating layer to the name, and lends this elaborate, dramatic name quite a bit of strength.

If you’re after a Spanish-English crossover less common than Sofia, but with the same globe-trotting bona fides, the baby name Rafaela belongs on your list.

Would you consider the baby name Rafaela? Which spelling would you use? 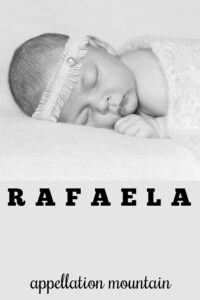