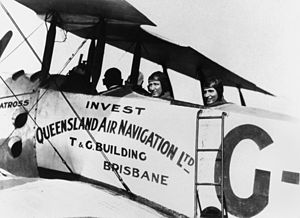 Scan any list of wacky celebrity baby names, and he’ll be near the very top.

Our Baby Name of the Day is Pilot.

The word pilot comes from the Greek pedon – steering oar.  It shares the same roots as pedestrian, one who goes by foot, even though it conjures up the wild blue yonder.

To get from ped- to pilot took a few steps.  The Old Italian pedoto meant helmsman, from pedon.  It became piloto.  Many words shifted from the Latin -l to a -d in the vernacular over the centuries.

By the early sixteenth century, a pilot steered a ship.  As man invented new forms of travel, the pilot remains in control.  Those who fly hot air balloons wear the title, too.  When airplanes came along, it was only natural that they were flown by pilots.

That’s not the only word, of course.  We think of them as captains, too, as in “Welcome aboard flight 123, I’m Captain So and So.”  There’s also the term aviator, though it can be broader, including others in military operations – navigators or weapons operators.

Ever since Tom Cruise flew across the big screen, naval aviator has a very specific image – confident, even arrogant, but overall, it is a positive image.

Pilot applies to lots of things that lead the way:

But does that make it a viable baby name?  Maybe.

Australian sci fi show Farscape included a character by the name, but the reason he’s on Appellation Mountain today is  actor Jason Lee and his ex, actress Beth Riesgraf.  Back in 2003, the happy couple was casting about for a name for their first child together.

Inspiration struck when they heard a song from California indie band Grandaddy: “He’s Simple, He’s Dumb, He’s the Pilot.”  The word pilot isn’t actually part of the lyrics – just the song title.  Grandaddy tends towards the cerebral, and the song has a haunting, ethereal quality.  Listen to it, and even if he still strikes you as outrageous, maybe you can imagine that it would feel like appropriate inspiration for some parents.

The Lee-Riesgrafs weren’t the only ones to use the name.  The 1940 Census includes a handful of men named Pilot.

It’s also sometimes a surname – and this is where it gets really interesting.  Pil and Pila both appear as Anglo-Saxon names, the kind that died out after the Norman invasion.  Compound names like Pilheard were also in use.  Pilot could be a diminutive form of Pila, just like Eliot emerged from Elias.

Still, it  is likely the celebrity influence behind the arrival of eleven baby boys named Pilot born in 2011.  Back in 2009, that number was 19.  That’s no Knox, but it isn’t zero, either.

Overall, Pilot is something of a romantic name.  He’s on trend with occupational choices and noun names.

My theory?  It isn’t Pilot that strikes us as outrageous.  It’s Pilot Inspektor.  Had he been named Pilot William Jason or Pilot Evan Elias or anything else in the middle spot, we’d see the first name in a very different light today.