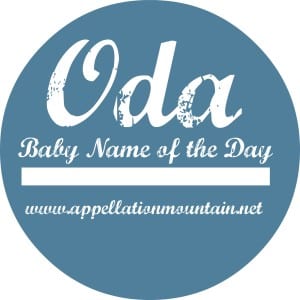 Short names are all the rage, but this one hasn’t been heard from since the 1910s.

Thanks to Colleen for suggesting Oda as our Baby Name of the Day.

Oda comes from the same place as many a given name: the Germanic Odo – fortune.

It’s a long list of names, from the clunky to the lovely:

Many of them have seem some use, and once upon a time, that was true for Oda, too.  In 1990’s Ghost, Whoopi Goldberg played Oda Mae Brown, the not-so-psychic psychic who keeps Sam and Molly together through the flick.

But Oda was a quirky name, a name meant to signal the character’s differentness in a world of Sams and Mollys.

You’d have to go back to the nineteenth century, or the very early years of the twentieth.  By the 1960s, she was no longer given to even five girls a year in the US.

Even at her heyday that only amounted to two or three dozen children born every year, and since none of those girls made it big in Hollywood or elsewhere, it is easy to forget that she was once in use.

Forms of the name were heard, of course.  Uta Hagen was a German-born actress turned legendary acting coach.  And The Black Swan raised the profile of the ballet Swan Lake, with the characters Odette and Odile.  More recently, Sienna Miller welcomed daughter Marlowe Ottoline.

There was also a Saint Oda.

She was born blind in Scotland, sometime around the late seventh or early eighth century.  She went on a pilgrimage as a young woman, in an attempt to restore her sight.  It worked, and Oda wanted to dedicate her life to God in thanksgiving.  Her father had other ideas, pressing her to marry.  She settled in the Netherlands, living as a hermit, in a town now known as Sint-Oedenrode.  Rode referred to a clearing in the woods, so Sint-Oedenrode is Saint Oda’s clearing.

But that was a long time ago, in the distant past.  To meet another Oda today, you’d be better off to head to Norway, where the name is in more frequent use.

It’s also a family name in Japan, where the Oda clan was especially powerful in the sixteenth century.  But there’s no evidence that the American female Odas were inspired by the Japanese surname.

In the US, no matter how many girls you meet called Mia and Ava and lots of other mini-names, odds are that Oda will remain in the past, even as the similar Ida and Ada are revived.

I’m tempted by Auda, which feels like an Audrey or Autumn cousin, except that she still sounds like Oda.  And I have my doubts about the sound of Oda today.

But related names make for some fabulous possibilities, in the first or the middle spots.  My favorites are probably Odilia and Odelia, another saint’s name, plus an -ia ending name, and an obscure gem for sure.  Ottilie and Ottoline are seeing some use, and for boys, Otis and Otto are definitely garnering some attention.  So even if Oda is out of use, her cousins are finding favor in 2014.