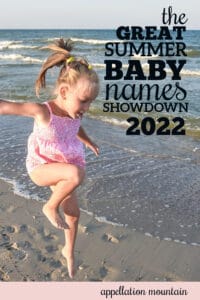 Time for the girls’ opening round in the New Names Showdown 2022!

Every year, the US Social Security Administration releases the 1000 most popular baby names for children born in the US during the prior twelve months. The release typically happens the Friday prior to Mother’s Day in May.

One of the most intriguing parts of the list? The new names that debut or return to the rankings.

Why does that matter?

Simply put, the US Top 1000 is the list. Pretty much everyone writing or talking about names draws inspiration from that particular data set.

And while the Social Security Administration generously provides a wealth of additional data, including files of every single name given to five or more girls or boys in a single year, well … we tend to focus on the main attraction.

That means that a name ranking in the Top 1000 is more likely to be noticed, and thus, more likely to rise in use during future years – even if the original spark that sent the name climbing in use has dimmed.

From those 36 names, I’ve narrowed it to just eight choices.

And now you get to vote, bracket-style, until those eight names become just one.

The champ will join prior New Name Showdown winners:

Vote however you like! You can vote for the name you think is mostly likely to catch on. Or the one you’d be inclined to give to a child of your own.

But do vote, because it’s your choices that pick the next winner!

Polls will remain open through Wednesday, July 6th. Check back on Saturday, July 9th to see which names advance – and, of course, to vote in the next round!