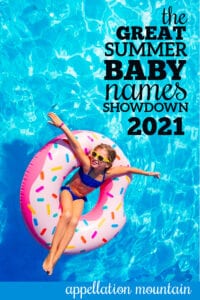 Time for the girls’ opening round in the 2021 New Names Showdown!

Wondering what that could possibly be?

On (usually) the Friday before Mother’s Day, the US Social Security Administration releases the new names popularity data, based on births in the prior calendar year.

It’s a fascinating list, and we dissect and review it for all sorts of information.

One of the most interesting parts? The returns and debuts. They’re the names that failed to rank in the prior year, but now claim their space in the Top 1000.

Sometimes they’ve teetered on the edge for a few years. Other times, the name’s return to the rankings comes after years of absence. Debuts, too, range from those that have slowly gained over a decade or more, to those sensations that no one saw coming even a few years earlier.

A couple dozen names fit into this broad category. Every year, I narrow the list down to just eight of the best new names for girls.

And then you vote until just one final name remains – the champion!

So we have a mixed record. A few of our past champions seem to be marching up the popularity charts, while others remain relatively underused.

How should you cast your votes?

Some readers prefer to vote for the name they think is most likely to catch on, and that’s fine. But I say just plain vote for your favorite – the one you’d love to hear on more children in the coming years – maybe even a child of your own.

These eight names will face off for the 2021 title. They’re listed in alphabetical order below, but for the Showdown, their popularity ranking will equate to their tournament seed.

Thanks for voting! Polls will remain open through Wednesday, July 14th. Check back next Saturday to see which names advance, and, of course, to vote in the next round!