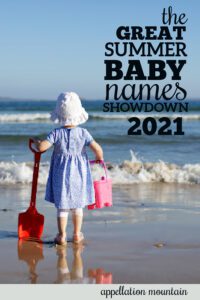 July has flown by! We’re already at the FINAL round for the Girls’ New Names Showdown 2021.

Every year, the US Social Security Administration releases the 1000 most popular names for girls and boys born in the prior twelve months. Some of those names are brand new to the list. Others are back after an absence. I winnow that list of new names down to just eight favorites … and then turn it over to you, to vote for your top pick.

That name becomes the champion in the New Names Showdown.

Past victors include Arden, Sylvie, Marlowe, Zora, and Elodie. While our track record is mixed, a few of these have caught on. (We’ve done much better predicting the next big thing in boys’ names!)

Your vote decides which name joins them!

But first, a look back at the semifinals.

With nearly 57% of the vote, Zoya bested Artemis. We do love a Z name, and Zoya – a Slavic take on Zoe – feels like a successor to former favorites like Maya. Still, mythological names are white hot, so it’s too soon to say that Artemis won’t also gain in use in the coming years.

Etta trounced Marceline, taking over 63% of the total. Sparky, vintage Etta feels like an obvious successor to Emma and Ella. Perhaps the name’s lead in the New Names Showdown proves this! Then again, ladylike Marceline has much to recommend it, too, and with favorites like Madeline so in favor, this name might also rise.

That means that our final contest pits two names that share similarities against each other.

Zoya and Etta are both brief, complete, two-syllable picks ending with a. But if Zoya feels global and modern, with just the tiniest hint of vintage appeal, Etta is the opposite. It’s straight out of the past, a revival name with antique charm and plenty of spirit. They’re probably not on the same shortlist for any given family, and they don’t quite sound like sister names. But they do both promise to be names to watch into the 2020s and beyond.

For now, it’s your vote that will name one of them the 2021 New Names Showdown champ.