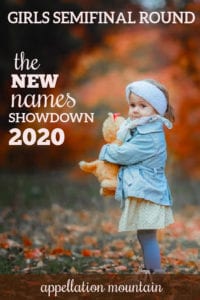 The votes are in! The opening round of the New Names Showdown 2020 is over, and just four names will advance to today’s SemiFinal round.

If you’re new here, every year we do our best to predict which of the names new – or newly returned – to the US Top 1000 will be the next big thing. Our track record is pretty impressive. Past winners include Wilder and Sylvie, Zora and Shepherd.

But the girls’ contest is always a little tougher than the boys. Maybe it’s because girls’ names feel so much more volatile, trending in and out of favor just a little more quickly?

Let’s look at the results from last week:

With nearly 62% of the vote, Navy sunk Zendaya. Could Navy be the next Ava-Ivy-Scarlett? Very possibly.

Theodora handily defeated Cleo, with almost exactly 58% of the total. Given the rise of Theodore and Thea, maybe this shouldn’t be a surprise. But as the mom of a Clio, I was rooting for the underdog!

Taking 60% of the tally, Elodie moves forward, leaving Magadalena behind. Elodie is a long-time favorite on naming sites, but only recently debuted in the Top 1000, so maybe that’s no surprise.

In the closest contest, Persephone eked out a win over Indie, with 52% of the vote. They’re such different names – elegant, ancient, and elaborate versus spirited, modern, and bright. No wonder it was close!

This next round feels absolutely impossible. I have no idea how I would vote!

Long and elaborate Theodora or the equally lovely Elodie?

Thanks for voting! Polls remain open through Thursday, October 15th. Check back on Saturday, October 17th to see which names advance to the Final. And, of course, to vote!