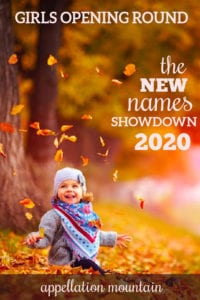 It’s the girls’ opening round in the 2020 New Names Showdown!

Wondering what that could possibly be?

Once a year, the Social Security Administration releases the Top 1000 most popular baby names. We talk a lot about the fastest rising names and the new Top Tens. But the real Christmas morning part for me?

All the new names! The ones that return to the US Top 1000 after a long absence, or those that debut for the very first time.

The list of every name returning or debuting in the girls’ Top 1000 for calendar year 2019 can be found here.

I narrowed that list – 40 names strong! – down to just eight contenders. These eight names now vie for the title of New Names Showdown 2020 champ.

There’s modern Navy and Indie, traditional but once rare Theodora and Persephone. Cleo feels modern, but is actually vintage. Elodie sounds like it could be vintage, but it’s actually newly popular today. Zendaya and Magadalena have both

Your vote determines which of these names move forward in the contest!

The gently French Elodie or the slightly Spanish Magdalena?

Short and sparky Indie or long and lovely Persepohone?

Check back next Saturday, October 10th to see which names advance to the next round – and, of course, to vote again!