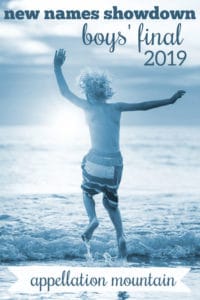 One of the finalists will join our circle of the best of the names debuting or returning to the US Top 1000 in a given year. The goal? To pick the name mostly likely to rise in use in the coming years, to transition from a name on the fringes to a mainstream favorite. We’ve done pretty good so far!

Before we move on to the voting, let’s look at the results of the SemiFinals.

Archie handily defeated Torin, taking 60% of the vote to Torin’s 40%. Lately, this name is everywhere. Even before Harry and Meghan chose it for their son, it had returned to the US Top 1000. But the latest addition to the royal family has sent our interest in Archie to a fever pitch. Will this translate to even more boys with the name? Or will it be more like the Elsa effect, with parents avoiding Archie because the pop culture association is overpowering? We’ll have to wait and see, but Archie does advance in this contest.

Gentlemanly British Benedict defeated rock star British Bowie, 66% to 34%. Are American parents in love with all things English? Benedict Cumberbatch, who gave us a 21st century Sherlock before donning the cape of Doctor Strange to save humanity, has helped make his name fresh and stylish once more. Plus, our affection for the nickname Ben helps. And the late, great David Bowie has put his surname in the same category as Hendrix and Lennon. But it’s Benedict that advances.

It’s a very British final, with Archie facing Benedict. One is casual, even cuddly; the other feels far more august.

And only one can win!

Voting remains open through Thursday, July 25th. Check back on Saturday, July 27th to see which name wins it all!