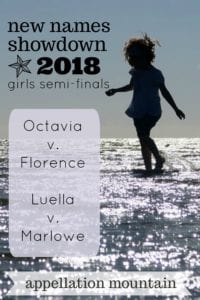 Let’s start with the results of the opening round.

All of that means Octavia, Luella, Marlowe, and Florence advance to the SemiFinals!

Ancient Octavia took to the sky in the post-apocalyptic sci fi drama The 100. Meanwhile, vintage Florence benefits from the 100-year rule that says a favorite from the early twentieth century is ready for revival. But which one will advance? That’s up to you …

Don’t you think Luella and Marlowe almost sound like sisters? Luella is retro and sassy, while Marlowe feels sleek and modern and, well, sassy. Maybe that’s why this feels like the toughest contest of this year’s Showdown.

And now a quick reminder: this contest isn’t necessarily about picking the name you’d use for a daughter. (Though it’s fine to vote that way if it works for you.) Instead, it’s about choosing the name we guess will catch on in the coming years. We’re doing a great job on the boys’ side, with Shepherd and Wilder winning the past two contests. But on the girls’ side? Not so much. Our last two winners, Sylvie and Arden, have both fallen in use. In fact, Arden is out of the US Top 1000 entirely!

Don’t forget to vote in the boys’ round, too. Polls remain open until Thursday, July 19th. Voting in the final round begins on July 21st. And then check back, because we’ll end the month with a new pair of champions, announced on July 28th!