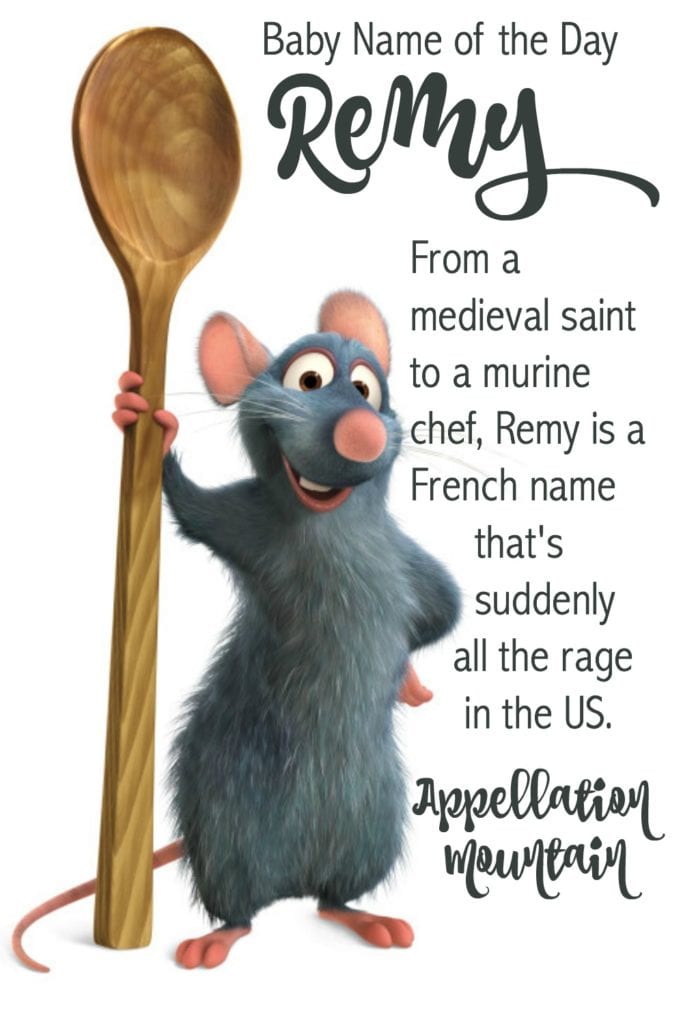 Remy is a medieval name transformed by the long-tailed hero of 2007’s Pixar hit Ratatouille.

Thanks to Lola for suggesting our impeccably French Baby Name of the Day.

Around the year 500, King Clovis united the Franks, founded the Merovingian dynasty, and converted to Christianity.

Saint Remigius was the Bishop of Reims who baptized Clovis.

It started out as a Roman family name, meaning oarsman.

Drop the -gius, and you have the vernacular form of the name. It was used steadily in France over the years, and Saint-Remy is a popular place name.

Even earlier, when the Romans arrived in Gaul, they became allies with a tribe already there: the Remi.

Some say that the tribe took their name from Remus – one of the mythical co-founders of Rome.

What we do know is that the city of Reims – where Clovis converted, where future kings of France were often crowned, the seat of Bishop Remigius – took its name from the tribe.

It’s also found as a surname, and in other European languages. Other Rem- names, like the Spanish Remedios – can also lead to Remy.

It was the surname of one of the most zealous – and notorious – of the sixteenth century witch hunters.

Remy Martin was a winemaker who switched to cognac back in 1724 and has been going strong ever since.

Characters in The Da Vinci Code and The Fairly Odd Parents have worn the name. It’s also the given name of the X-Men character better known as Gambit. Gambit has appeared in several of the series’ big screen adaptations. Now Channing Tatum is set to take on the role in a stand-alone movie – which could be a big boost for the name.

The name owes its rise to an unlikely combination of events.

Disney-Pixar’s 2007 Ratatouille gave this name to an aspiring French chef – who happened to be a rat. Patton Oswalt voiced the unlikely gastronome.

But it wasn’t just Disney boosting the name.

Hip hop also gives us Remy Boyz – most famous thanks to their successful former member, the rapper known as Fetty Wap.

Either way, the name’s ties to music gives it an edge, while the Disney connection makes it feel playground-ready.

Speaking of edge, the name also owes its success to the rise of Remington.

A surname name borrowed from a English place name, Remington is best known as a firearms manufacturer. Eliphalet Remington founded the business in 1816 in upstate New York. It remains a major manufacturer of guns and ammunition, the oldest gun maker in the US.

Remington has risen dramatically in the twenty-first century, going from a sometimes-heard family name to a mainstream favorite. Kelly Clarkson recently chose it for her son. As of 2015, it was given to over 450 girls and nearly 1,200 boys. It’s definitely part of the ready, aim, name trend that has appealed to parents in recent years.

From animated family-friendly flicks to rising rap stars, from early medieval France to an Americana pick with ties to weaponry, Remy is a name of contrasts. Maybe that’s why it appeals to so many parents today – and is quickly becoming a go-to choice for boys and girls alike.

Do you like Remy better for a boy or a girl? How about Remington?

This post was originally published on January 23, 2009. It was substantially revised and re-posted on June 6, 2016.