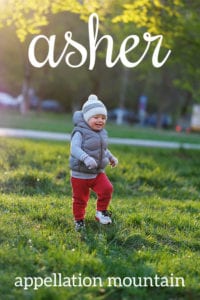 Asher feels like its headed for the US Top 20, a Biblical boy name that everybody loves.

ALL THOSE ASH NAMES

But Asher goes back to the Old Testament.

He’s one of Jacob’s dozen sons, and founder of one of the Twelve Tribes of Israel.  The name has a long history of use among Jewish families.

It comes from the Hebrew word osier – happiness.

His tribe settled on fertile, prosperous land, suggesting that his name shaped his destiny.

Some suggest the name comes from Assyrian legend, or possibly an ancient Semitic goddess. But the Old Testament reference clearly inspired parents.

It wasn’t used widely outside of Jewish families until the Protestant Reformation, when parents went flipping through the Bible for fresh inspiration.

Notable men have worn the name in the US since early days.

Asher Levy settled in New Amsterdam, by way of Brazil, with two dozen other Jewish settlers in 1654.

A nineteenth century architect; a member of the Hudson River School of painters; and a Rhode Island senator also make the list.

But it’s far from James or even George, a name that’s in use – but far from familiar.

There’s an uptick in the number of boys receiving the name beginning in the 1970s.

One reason? Chaim Potok’s 1972 novel My Name is Asher Lev, about the struggles of an artistic boy born into a Hassidic Jewish family in 1940s Brooklyn. Potok himself is said to have identified strongly with the character, and the author was a well-established figure by then.

It’s the middle name of actor Judd Nelson, as well as playwright Arthur Miller. (Though both were born well before Potok’s novel.)

And so when Ashley cracked the girls’ Top 100 in 1978, it probably encouraged parents to consider Ash- names for boys. By 1991, over 100 boys were named Asher in the US for the first time ever.

It took another novel to put this name on the path to the Top 100: Lois Lowry’s The Giver.

Published in 1993, it tells of a dystopian world, where memory and individuality are nearly erased.

The main character is called Jonas, but his closest friends are Fiona and Asher.

It’s been widely read ever since. And since it’s a young adult novel, no surprise that some of those readers grew up to consider the name for their sons.

Adaptations have ranged from a stage play to an opera to a 2014 movie. Cameron Monaghan played Asher on the big screen.

A great meaning and a few pop culture references can propel many names out of obscurity. But the combination of the familiar first syllable Ash with an R ending came at exactly the right moment. From Connor to Carter, Hunter to Xavier, it’s a sound that feels just slightly different after decades of Aiden and Ethan and Dylan.

Plus, we’re still wild for Biblical boy names. Just ask the parents of Ezra and Isaiah, Isaac and Elijah.

Do you think Asher will reach the US Top Ten? 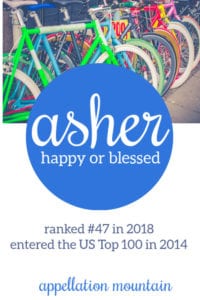