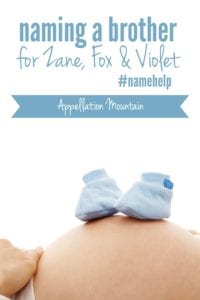 Hi! I could use some name help. I’m due with baby #4, a boy, in November and we’re having a really tough time with names. His middle name will be James.

I think the main issue we’re having is that my husband and I both tend to like “thing” names, like Fox and Violet, but I’ve been trying to find a non “thing” name for this baby so my first born isn’t the odd one out. My husband wanted Jett and I wanted Luca but we vetoed those.

A few possible contenders are:

We keep the name a secret until baby is born so I have no one to bounce my thoughts off of! So, I don’t know! I’d love to hear some ideas. Thanks so much!

Here’s what jumps out at me: your two sons have single-syllable names.

Second place goes to all of those high-value Scrabble letters: the Zane’s ‘z’ and Fox’s ‘x’, plus Violet’s ‘v’.

Factoring in Axel, I suspect that you gravitate towards short, modern boys’ names with powerful sounds. It just so happens that these tend to be noun names, in slightly higher proportion than is true for all names.

Violet also feels a little different because, well, it’s been a given name for ages. Fox, not so much. But the fictional Dowager Countess of Grantham claims a birth date of 1842, and we all find the name perfectly reasonable. (Indeed, it is. The name ranked in the US Top 250 back in 1880, and plenty of nineteenth century Violets appear in the historical record.)

And yet, I agree that avoiding another noun name – especially a nature name – feels sensible. If – and only if – you can find one that you love. I also wonder if you’d prefer to choose a two-syllable (or even longer) name for your son, to bridge the shorter sounds of Zane and Fox with the slightly longer sound of Violet. But again, that’s only if the right name happens to be longer. Plenty of short names made my suggestions list, too!

Arlo – Would you consider Arlo, or maybe Milo, Nico, or another o-ending name, of which there are dozens. No, hundreds. I suggest Arlo because Leo is so high on your list, but you’d prefer something less common. Also, Axel reminds me slightly of Arlo. And lastly, an o-ending name stands up to those high-value Scrabble letter choices nicely. It’s another distinctive sound. (Even though it’s just one point in the board game!)

Dash – Okay, Dash could be considered a word name. It feels like an action verb name. And yet, like Zane and Fox, Dash seems effortlessly cool. While it’s most often short for Dashiell in theory, Dash ranks in the US Top 1000, while the longer form does not.

Everett – Like Violet, Everett would make for a longer choice than Zane or Fox. Actually, the names share a ‘v’ sound and ‘t’ ending, too. It almost makes your older children’s names seem paired – Zane and Fox – and your younger children’s names sound like a set. Hmmm … that’s either exactly perfect, or completely wrong. If you’re in the wrong column, might I suggest another -et ending name, like Beckett, instead?

Ezra – Ezra ranks in the current US Top 100, just a few spots north of Leo. So maybe this also feels too popular? But I think it’s a great brother name for Zane, Fox, and Violet; plus, Ezra’s ‘a’ ending reminds me of Luca.

Jude – Another strong sound that pairs well with Zane and Fox. Sound-wise, it reminds me slightly of Jett. No question that Jude feels more traditional, though.

Lennon – Here’s the problem with Lennon: it implies that you’re huge fans of the musician. Others will almost inevitably ask. And yet, Lennon makes for a cool name that doesn’t duplicate sounds.

Roman – Speaking of cool names and strong sounds, how ’bout Roman? Zane, Fox, Violet, and Roman. I don’t have a great reason, but I think this is my favorite so far.

West – You probably shouldn’t name Fox’s brother Wolf, but West might work. Yes, it’s another word name. But in general, I like the idea of a W name. Wilder, Weaver, and Wells come to mind, too.

And yet, even after finishing this list, I wonder if Axel isn’t your best bet. Sure, Fox and Axel share a strong, distinctive letter. But they don’t share an initial. And I’d file Axel with Violet. Maybe it brings to mind a thing – a car part, a figure skating jump – but it actually is not a noun. Plus, you’ll likely say your children’s names in birth order much of the time: Zane, Fox, Violet, and Axel. And I like the fact that it’s a two-syllable name, not another single-syllable choice.

If the duplicated ‘x’ bothers you, I’d lean towards Arlo or another o-ending boys’ name. There are so many to choose from, and I think it gives you a distinctive sound that stands out from your other children’s names, while still fitting in.

Readers, what would you suggest as a brother for Zane, Fox, and Violet? Do you agree that the Fox/Violet nature name isn’t too, too obvious? Or am I wrong-headed on that one?