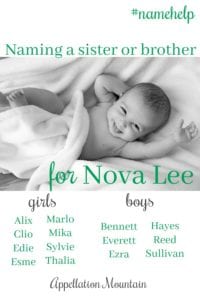 Update: He’s here! Lindsay writes “For a girl we stuck with our original ideas of Sadie and Remy … my husband and I had committed to the intuition that Remy would be entering the world. So imagine our surprise when our now beloved Bennett popped out instead! He was instantly ours, instantly loved, and instantly Bennett.” Welcome to the world, Bennett! What a great name – and so beautifully said.

I stumbled upon your site while pregnant with my first child and was led to the name Nova (middle name Lee, which is a family name). I’m now pregnant again and I need to find an equally stunning name for Nova’s brother or sister.

Of course, there are some catches.

First, I’m a teacher which has irreversibly destroyed some of the best names ever! Second, my husband and I come from large families and we are the last of the bunch to be popping out kids … thus leaving the well of family names a bit dry. Third, my husband is Middle Eastern which you would think could offer a cool collection of names. However, most of the ones that work well between Arabic and English have already been taken by a family member or they have more of a Muslim connection (my husband’s family is Catholic).

And finally, any of the names we gravitate toward all seem to have a big “however” attached to them.

For boys, our top contenders are Anderson, Caleb, and Zane. Or should I say, my top contenders! My husband is not really a fan of any of these. Anderson is my least favourite of the bunch, but the only one my husband sort of likes. My biggest issue with it is that it will always be “Nova and Anderson”. I just dislike the way the repeating “and” sounds. Caleb is a favourite of mine, but apparently in Arabic it sounds similar to the word for dog. As a canine lover, this doesn’t even slightly offend me. But I’m not sure my mother-in-law could forgive me if we went ahead with it. Zane was our number one choice for a boy’s name through my first pregnancy. Unfortunately, we made the mistake of sharing this name after the birth of our daughter and received a lot of criticism. I love the name Zane because it has connections to the name John which is an important name in my husband’s family. Plus, other variations of Zane (Zain, Zayn) have Arabic roots, but apparently those roots are more in the Muslim tradition. Oh, it’s so confusing! I’m pretty sure if it comes down to it, I’ll be fighting for the name Zane because I still love it.

For girls, it’s a bit less complicated because I like hundreds of girl names. The biggest problem is that I want to love the name as much as I love Nova’s name. (Is that possible?) I also want it to compliment the name Nova. We can’t have a Sarah now that we have a Nova. It needs a little bit of spunk, not so much that we end up with a Cinnamon or Rapunzel. We are also definitely against the celestial names. Even though I love the name Luna, it’s just way too cutesy to go with that theme. My top contenders are Sadie and Remy, but I’m not completely sold on either of those. My husband thinks Sadie sounds like the name of a dog (again… that’s not offensive in my books) and he’s just not a fan of Remy.

Any name suggestions or guidance would be excitedly welcome!

I absolutely laughed out loud at your description of the right name for a daughter! I agree – Nova’s younger sister can’t be Sarah, but, well, it’s very easy to go too far, too, isn’t it?

This feels like the perfect storm: teachers come across hundreds of names, and inevitably these attach to certain children. When you do find a name that feels unspoiled and new, there’s an excellent chance it won’t pass your husband’s Arabic-but-not-Muslim test.

In short, you have a lot of reasons to say no to nearly every name.

For now, I’m going to ignore the language concerns. After all, Nova Lee is not an Arabic name. It’s just a name that happens to be easily pronounced in Arabic. If that’s your standard, then your pool of possible names is much larger. Plus, you mentioned that all of the obvious crossover names are taken, so I’m guessing that Lila/Layla and company are already in use.

Nova literally means new, but it also feels fresh and original without seeming invented. I know you’d like to avoid celestial names like Luna, but maybe other borrowings from myth will have that same quality? Or maybe just something that feels fresh and modern without being too new?

A Sister for Nova Lee

Alix – Promise this isn’t just some funky re-spelling of Alex. It’s a medieval French form of the Germanic Alice, which just happens to coincide with the Greek Alexander. You’ll find it in the history books. But maybe it’s too obscure?

Cleo, Clio – Full disclosure: I’m mom to a Clio. And while I love, love, love her name, it can get confused for Chloe. Still, a bright, o-ending name for a girl might be just the thing, especially one that feels rooted in history. As for the ‘e’ versus ‘i’ spellings? Cleo is typically associated with Cleopatra; those in the know might recognize Clio as the muse of history. Strictly speaking, it’s the same name.

Edie – Sadie reminds me of Edie, only Edie is less common. (Which means you probably don’t know any pets by the name!) I think it falls exactly in between Sarah and Cinnamon. Another option: name her Eden, with or without Edie as a nickname. Eden has ties to the garden, of course, but that’s far from a theme.

Esme – Esme is the kind of name that no one over the age of 50 seriously considers as a given name. Oh, they might recognize the JD Salinger reference. Or even the Twilight character. But Esme is one of those names that’s been hiding in plain sight for years, seldom heard, but just waiting for wider use.

Marlo – If not Cleo/Clio, maybe Marlo? It has the same vibrant o-ending, but feels a little more retro. One issue: Marlow and especially Marlowe are also rising in use for girls, so you might face a little bit of a spelling conundrum. But I do think that Nova and Marlo sound very much like sisters, both balanced on the edge of retro and modern.

Micah/Mika – I first thought of Mika, pronounced with an ‘ee’ sound. But maybe Micah, which typically sounds like Mike+a is a better option? Micah is an Old Testament name that we typically think of as masculine, but it comes from Micaiah, which used for men and women in the Bible. Mika might be Japanese, or it could be another feminine form of Michael. I think both work well with Nova.

Sylvie – Nova’s ‘v’ is so appealing that I wondered if another ‘v’ name might work? Names like Vera seem awfully close to Nova, but maybe Sylvie works? It means forest, so it’s another subtle nature name, but not one borrowed from the night sky.

Thalia/Talia -Depending on your spelling, this name could be Greek or Hebrew in origin. It’s the tiniest bit frillier than Nova, but only a bit.

A Brother for Nova Lee

Ben, Bennett – I’m certain you’ve taught a little Benjamin or two, but does Bennett – called Ben or not – offer an alternative? I’m not sure how Bennett works in Arabic, but I suspect that Ben would cross cultures.

Everett – Since we’re on the ends-in-t train, have you considered Everett? It shares Nova’s middle ‘v’ but doesn’t sound similar.

Ezra – Because Ezra exists in Greek, Latin, and Hebrew, I’m guessing it imports nicely to Arabic. But maybe I’m wrong? Google tells me that Azra is feminine in Arabic, which might make Ezra a non-starter. Still, I like it with Nova, so let’s leave it on the list.

Hayes – Zane reminds me of Hayes. Is it possible that Hayes shares the same general sound, but without the problematic associations for your husband’s family?

Reed/Reid – Like Zane, Reid has a short, upbeat sound. Again, there’s a spelling choice. Reid is more popular as of 2016, so I’d probably suggest that spelling.

Sullivan – Is there another three-syllable surname name that might work, if Anderson is close-but-not-quite? Sullivan made my list for two reasons – first, the whole three-syllable, surname-name thing. But secondly, it shares the ‘v’ sound of Nova, which might make for an appealing, subtle connection between the siblings’ names.

For a boy, my favorite is Hayes. It has the same different-but-not-too-different vibe as Nova, seems like a style match for Anderson, but shares sounds with Zane. Of course, I should also add that Zane would be my first pick – if only it wasn’t so controversial!

I’m less decided when it comes to girls. Edie keeps leaping out at me. It’s similar to style to Sadie, and even shares some of the same sounds. So I think I’ll put that at the top of my list, though I can easily hear Nova having a sister with a name like Marlo or Thalia, too.

Now let’s turn it over to the readers, because I know you’ll have some great ideas: what would you name a sister or brother for Nova?