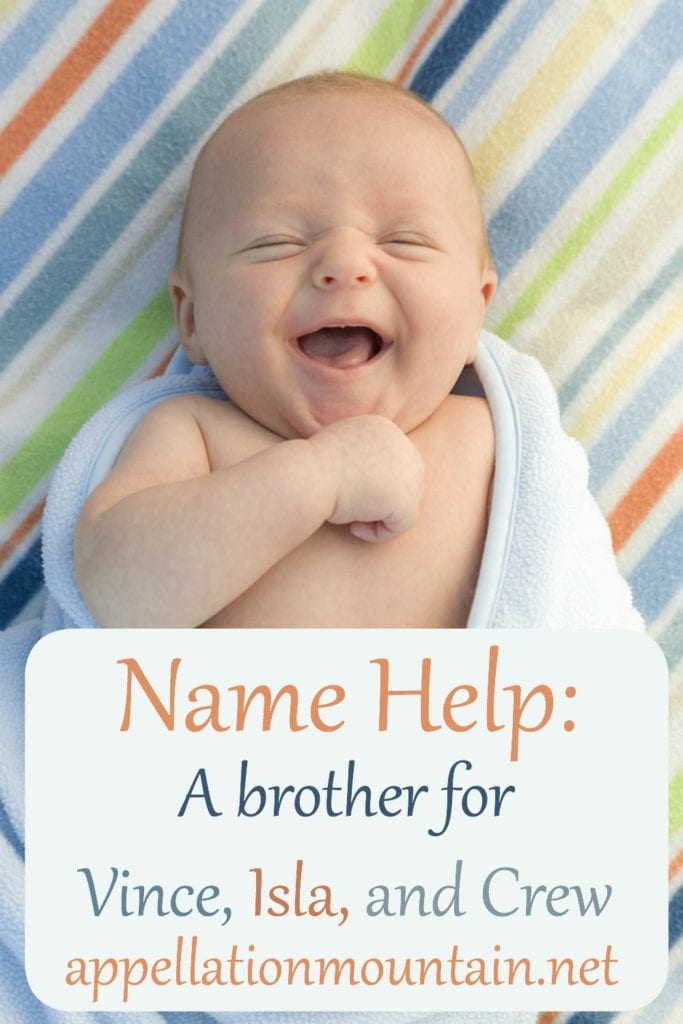 I am pregnant with my fourth baby and due in November. We will not find out what we’re having.

If it is a girl, the name will be Vera or Veda.

My husband and I cannot agree on a boy’s name.

Our older children are Vincent/Vince, Isla, and Crew. I think Knox is too popular and trendy; I don’t like Paul, and my husband does not like Rome.

I am drawn to the older, more vintage names I think.

Any help is greatly appreciated.

Please read on for my response, and share your useful suggestions in the comments.

I’m always fascinated by how we describe our favorite names. I tend to think of names like Felix and Jasper as vintage. Your girl names, Veda and Vera, hit that mark, too. But Crew, Rome, and Knox? To me, those feel like brisk, modern boy names – the very opposite of vintage. Which isn’t to call one bad and one good – just a good reminder that describing our style doesn’t always fully communicate the names that we love.

Popularity is so tricky! Isla is edging closer to the Top 100 in the US, and is already in the UK Top Ten. Maybe that’s why you’re worried about the trajectory of Knox, having watched a child’s name go from pleasingly uncommon to everywhere in just a few short years? Still, it might be a mistake to cross Knox off your list if that’s the only strike against it.

Then again, the sea of names is vast and deep. Let’s look for names with some history, something that’s not wildly popular, and probably something on the shorter side, too.

Dean – Dean has gained in popularity in recent years, and yet it doesn’t feel very popular does, it? Characters from Harry Potter and Gilmore Girls introduced Dean to a younger generation. Plus, James Dean remains forever cool. If you love vintage, Dean seems like a brother for Vince and Crew – the happy medium choice that ties them both together.

Flynn – The bad news about Flynn? It might be confused for Finn. All. The. Time. The good news? Flynn sounds like a dashing, slightly different boys’ name. It’s on-trend, but not trending upwards particularly quickly. Errol Flynn lends this name a dashing vibe, while Tangled’s Flynn Rider makes this name familiar to a younger generation.

Rex – Regal Rex seems like an impeccable classic, and yet it shares so much with modern favorites like Jax.

Ross – Here’s a shocker: Ross does not currently rank in the US Top 1000. Maybe that’s because it’s stuck in the 1990s, still hanging out at Central Perk on Friends. Or maybe that’s because Ross caught on during the 1980s, reaching the Top 200 during the decade. But I think Ross feels like Wyatt and Knox and lots of other stylish names of our day, too – and could make a great brother for Vince, Isla, and Crew.

Holt – Holt reminds me of Knox – short name, strong sounds. It started out as a place name and surname referring to a grove of trees.

Ray – Or  maybe you’d like Ray? It’s edgy and cool, but also has a vintage, throwback vibe.

Zeke – Zeke strikes me as close to Ray, but a little bit quirkier. Zeke splits the difference between cool, modern Crew and the more traditional Vince.

Calvin – Another option might be to choose a name like Calvin – vintage and traditional – with a great nickname, Cal. (There’s no shortage of formal names for Cal.)

Wilder – I think Wilder is a name that’s going places, but it’s not quite there – yet. It feels outdoorsy and fun, but traditional, too.

Overall, I’m tempted to suggest something like Calvin – vintage, yes, but with a very cool short nickname name. Vince, Crew, and Cal sound like brothers.

I’m very interested to hear from readers on this one – especially readers with a similar style! What names do you think would work well for this family?