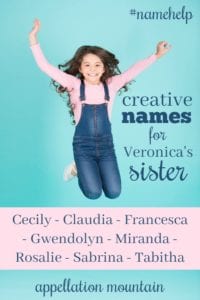 Help! We’re expecting a second daughter at the end of August, and we can’t decide on a name.

Our first daughter is Veronica Claire. We chose her name almost instantly, during a long drive right after the ultrasound where we found out she was a girl.

What we like about it: it’s different, but everybody knows it. There’s really only one was to spell it. It feels sort of creative and fun, but it’s really kind of an old name. We sometimes shorten it to Vee and Vica and Vero at home, but most other people just use the full name.

People sometimes ask if she’s named after someone. She isn’t, and we’re not considering family/honor names this time around, either.

This time, it seems like all the names we like are either taken, or maybe a little too weird. My husband suggested Prairie, which I want to love. But I think it’s a little too much. Also, I keep seeing the Muppet in my head. I liked Josephine, but good friends of ours just named their daughter Josephine. Harriet was also on my list, but my husband doesn’t like the idea of the initials H.H. (Our last name starts with H, is two syllables, ending with -son.) Beatrice was almost Veronica’s name, but now that have Veronica-Vee, we really can’t have Beatrice-Bee.

I know what you mean. I’ve been working on a list of creative girl names, but they’re much rarer: Tallulah, Romilly, Saskia. They sound almost like your style, but I can imagine lots of people having trouble with such unusual names. One of Veronica’s many charms is that we all immediately know to spell and pronounce it – without feeling like it’s a name we hear too often.

Other names, like Penelope, have the same vibe. But they’re Top 50 choices. Does that automatically rule it out? I’m not sure it should, but since part of Veronica’s appeal is the name’s relative uncommonness, I’m going to automatically cross out anything in the Top 100-ish.

It also strikes me that Veronica is a big name, with lots of sound. A shorter name might fade into the background compared to Veronica. And that’s not quite what you’re after, either, right?

One final consideration: you’re looking for a name that can be used in full, while still having rich nickname potential. That can be tricky! Some names beg to be shortened. Abigail is nearly always Abby, and I don’t think I’ve ever met a little Lillian who isn’t Lily. But most names mostly work in full, especially if you’re willing to insist upon it.

Cecily – Cecilia came to mind first, but I wonder if Cecily and Veronica make a better pair? Cecily doesn’t even crack the current Top 1000; for reference, Veronica stands at #378. Much like Emily can be Em, there’s something about the name that argues against it. Still, does Cecily have the same instant-recognition as Veronica? Maybe it’s a little too different? And Cecilia, at #168, might be a little too familiar?

Claudia – At #829, Claudia is less often heard than Veronica. But it shares many of the same qualities: a strong sound, an obvious spelling, and an immediate familiarity without being at all common. What gives me pause is that it might be tough to shorten as naturally as Veronica. But Veronica and Claudia sound like they could do nearly anything.

Francesca – Francesca is the last name I added to my list, but I think it might be my top choice. At #435, it’s similar to Veronica in terms of current use. And I love the way Francesca shortens so easily. (Frannie! Cheska, Chess, France …) But unless you choose one, I suspect most people would call her Francesca. Both feel slightly Italian, but not overly so.

Gwendolyn – Or maybe Gwendolyn is my favorite? First a quick note: Gwendolen, with the -len spelling, is the Welsh original, but the -lyn has long been preferred in the US. At #379, Gwendolyn is very close in popularity to Veronica. And I think it has the same quality – familiar, but not too popular. One downside: I can see this immediately being shortened to Gwen, unless you made a point of using the name in full.

Miranda – Miranda came to mind immediately, and I like it quite a bit with Veronica. Plus, I’m a sucker for the meaning: admirable. Miranda ranks #344, and nothing really sounds quite like Miranda. So I think that makes it very much like Veronica.

Rosalie – Cecily feels a little bit daintier than Veronica, I think, but Rosalie seems every bit as spirited and vibrant. At #236, I think it’s very much in the sweet spot for familiar, but not common.

Sabrina – Sabrina comes from poetry, rocketed into pop culture thanks to Audrey Hepburn and Charlie’s Angels, and yet somehow never became so wildly popular that it’s tied to a single generation or decade. At #434, I think that makes it a great sister name for Veronica. Except – could you have Vee and Bree? That gives me pause …

Tabitha – Get this: Tabitha does not appear in the current US Top 1000! It left entirely after 2016. It’s never made it as high as the Top 100. I think Veronica and Tabitha sound unexpected and creative, but it’s definitely an old name – Biblical, even.

Okay, so I like all of the names on this list! But I wonder if Gwendolyn, Tabitha, or Francesca works best?

Readers, I know you’ll have some great suggestions for Kristen. What would you name a sister for Veronica Claire?