Baby Name Help is a series at Appellation Mountain. Every Saturday, one reader’s name questions will be discussed.

Melanie and her husband are expecting baby number four soon – her due date is January 30th!

Their first three children all have names with the letter ‘v’ in the middle: Olivia, Nova, and River.

Don’t really want to continue with the ‘middle V’ as it was accidental but almost feel like we should. We are altogether stuck!

Read on for my answer, and please share your suggestions, too!

First, thanks for writing, and congratulations on baby #4!

The heart of your question is this: Do you have to continue the ‘v’ theme, with an ever-dwindling pool of names?

The answer is no.

No, you simply do not.  No family should ever feel pressure to continue with a name theme just because they’ve stumbled into one.  Or even if they’ve intentionally chosen one.

Well … maybe if you’re Michelle and Jim Bob Duggar, and you’re adopting twins, and the cameras are rolling, and your 19 older kids are debating the merits of Julie and Jethro … then maybe you’re stuck.

But for the rest of us, there’s no rule saying that a theme has to continue.

So how do you go about naming a kiddo without a V in the middle name?

Let’s get some feedback on this precise point – to V or not to V – from the AppMtn community before we go any farther.

Okay, now let’s see if we can pull together a shortlist of possibilities for baby #4. 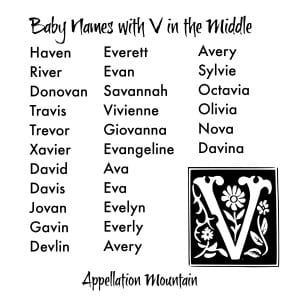 Let’s start with one list I feel compelled to make, even though you’ve almost certainly considered all of them: the V-in-the-middle names you won’t be using.  On the off chance that something does leap from this list to the top of your possibilities, let me assure you this: no one can insist you continue a theme, but no one can insist you drop one, either.  Even if you’re planning on a big family, you wouldn’t run out of baby names with V in the middle.

Now let’s bid a fond farewell to Eva and Davis, Sylvie and Jovan, and move on to other possibilities.

A Sibling for Olivia, Nova, and River: Nature Names

Let’s start with some possibilities for a girl:

Now some options for a boy:

What do you think of the possibilities I’ve suggested for baby #4?  What would you add to the list?  And should they really stick with V in the middle names, or do you agree that it’s time to move on?