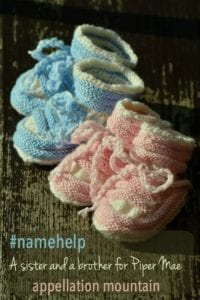 Hello! I was wondering if you could please do a post for me? My wife and I have a beautiful 3yo daughter, Piper Mae. Now my wife is pregnant with boy/girl twins. Some names we like are Flynn, Harvey, Rory, and Hudson for boys. For girls, we have Darcy, Andi, Lane, Eve, Lennon, Indie, Marlowe, Neve, Blair, and Aubree on our list.

I don’t know what our style is, but I guess you could say we have a thing for surnames as first names!

And our girls’ names are not overly feminine either. Neither of us are fans of the top ten Sophie, Ava, Olivia, etc. But I also don’t want to go too boyish.

We are super keen for any suggestions! I love a lot of the names I read on your site

How exciting to be expecting twins! Congrats to you and your wife!

Ten years ago, I would have advised that your boy name and girl name should be clearly gendered. Today? I think it matters less and less with every passing year. Maybe it’s because millennials grew up with boy-Jordan and girl-Jordan and turned out just fine. Or maybe we’ve evolved as a culture.

And yet I do notice that the surname names you favor for a daughter fall on the more-often-used-for-girls side of the line. So that makes this easier. And you’ve mentioned a concern around this topic, so we’ll make sure to address it for that reason, too.

Since you wrote in before the recent storms, I’m wondering if you’ve taken Harvey off your list? If you haven’t, I will. Not necessarily because of the devastation in Texas, but because it seems quite different from every other name on your list. Flynn, Hudson, and Rory all sound modern and brisk. They seem like brothers for Piper.

Hudson ranks in the current US Top 100. While it’s far from the Top Ten, I wonder if that’s a dealbreaker for you? Rory trends unisex, though the name’s roots are clearly masculine, and it sounds like that might be a concern. So I’d put Flynn at the top of your list. It has everything – a modern sound, but plenty of history. It feels familiar, but only ranks #675.

Grady – What surname names fall between Harvey and Hudson? I keep coming back to Grady. Grady ranked #357 last year. While it feels reasonably popular, Grady can’t be considered a shooting star, gaining in use by dozens of places a year. This one boasts a great meaning, too: noble.

Kieran – I love the sound of Piper and Kieran together. It ranks #540 in the US, so it can’t be called too popular. The spelling Ciaran is preferred in Ireland, but the K version feels more familiar in the US.

Lennon – Yes, I know. Lennon appears on your girls’ list and it is slightly more popular for girls in the US as of 2016. (649 girls were given the name, versus 446 boys.) Still, I think it’s worth considering.

Max – Longer Max names abound, but just Max ranks #118. It has the same brief-but-complete vibe as Flynn. While it claims vintage status, Max feels modern. It splits the difference between retro Harvey and modern Hudson.

Ronan – There seems to be a subtle, Irish theme linking some of your favorite boy names. Ronan ranks #315 in the US. It means little seal, which is quite sweet. And it sounds like so many stylish boy names today without feeling trendy. It makes a great brother name for Piper. One downside: it may be misheard as Roman and Rowan.

Vaughn – Vaughn rhymes with former favorite Sean, but this name is Welsh rather than Irish. It has the same short style of Flynn, but the ‘v’ of Harvey. Spelling might be a concern here – I can imagine confusion with Von and even Van. But Vaughn remains common enough as a surname that it shouldn’t prove too difficult.

Many of the names that come to mind immediately – like Sawyer and Rowan – might trend too unisex for your preferences. Aubrey ranks in the US Top 25, so I’m not sure if if Aubree passes your popularity test. And Lennon is enjoying increased use for boys and girls. My favorites with Piper are Darcy, Marlowe, Neve, and Blair. I also love Lane for you, except I think it fails the unisex test. Despite the popular Gilmore Girls character, Lane remains far more common for a boy in the US. (It ranks #294 for boys, while it does not chart for girls – though Laney and Delaney do.)
So if not Darcy, Marlowe, Neve, Blair, or maybe Lane, I would suggest:

Bree – Since you shortlisted Aubree and Blair, I wonder if just Bree might appeal? It sounds modern and invented, but Bree has Irish roots that make this name traditional and very 21st century at the same time.

Eden – Eden falls just outside of the current Top 100. It seems feminine, but tailored – the 21st century equivalent of Lauren, and a great sister name for Piper.

Hadley – Forgive me if I’ve said this a thousand times, but Hadley always strikes me as one of the best surname names for girls. Like the mega-popular H surname name Harper, Hadley claims literary ties (via the first Mrs. Ernest Hemingway, and the fictional account of their early years of marriage in The Paris Wife). But it also feels fresh and modern. A win-win.

Haven – I’m not sure if word names appeal to you; but then again, Haven sounds an awful lot like a name-name. It shares the ‘v’ of Harvey and Neve, as well as the tailored qualities of many of your favorite girl names.

Juno – Marlowe ends in ‘o’ and so do dozens of appealing names for girls. Juno belongs with the the best of that list. It starts out vintage, gentle June, but that ‘o’ ending takes the name in an upbeat and unexpected direction.

Tierney – Another Irish-inspired choice, Tierney makes me think of legendary 1940s actress Gene Tierney. That puts it somewhere between Harlow and Madison.

Now, to mix and match names for twins. I’ll rank my top five, though I think you have lots of amazing options:

Okay readers, I know you’ll have some spectacular ideas for Merindah and her wife! What would you name boy-girl twins, joining big sister Piper Mae?