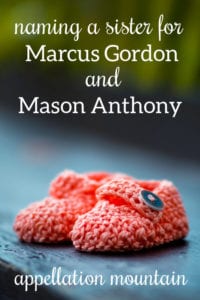 I am due with baby three in July and we found out we are having our first girl!

Her big brothers are Marcus Gordon and Mason Anthony. Their middle names are mine and my husband’s fathers names.

We tend to lean toward not too traditional but not too modern. We like to be different but not super out-there. Timeless but not boring. We like names that can be shortened or easily have a nickname. We are Catholic and I would like to have a faith aspect somewhere in her name.

Girls names we like but aren’t certain of are:

Congratulations on your first daughter!

If your husband is against M names, then it’s probably time to move on to another letter. As Swistle says “two is a coincidence, three is a pattern.” Marcus and Mason can have a future sibling named Andrew or Griffin or Zachary, but Marcus, Mason, and Mateya? You’re almost wedded to the letter M at that point.

Ruling out names as “too popular” isn’t something I normally advise. There are lots of good reasons to use Top Ten – even #1 – names. But Olivia has ranked in the US Top Ten for nearly two decades. Even if it doesn’t feel especially popular in your area – and it’s not in my circle – you might find that it repeats more than you like.

Emilia feels like a safer bet. If you really wanted to choose from those four names, I’d rank it #1. While it ranks in the US Top 100, and is very close to the even more popular Amelia, it’s still less common than Olivia. You can choose from several saints with related names. And I think it’s a very 2020 name: at-home in a twenty-first century classroom, but with deep and meaningful roots, too.

And then there’s Elliott.

This one is tough. Passing down mother’s maiden names is plenty traditional. Surname names for girls are popular today, too. So in that sense, it hits all the right notes.

But I do think that Elliott sounds very much like a brother for Mason and Marcus, and that might feel a little too different for your family. Does the idea of Elliott being mistaken for Mason’s brother give you pause?

I do think Emilia Elliott is perfection, and I like Elliott Emilia quite a bit, too.

But let’s look at a few more options.

Cecilia – A great alternative to Olivia and Emilia, Cecilia ranks #155. Plus, Ceci makes a sweet nickname, along the lines of Emmie and Ellie.

Clara – I like the strong, straightforward sound of Clara with Mason and Marcus. At #103, I think it hits that familiar-but-not-common note.

Eliza – Evergreen Elizabeth shortens to sparky Eliza, a name that feels traditional, but very at-home in 2020.

Francesca – Is this name too long for you to consider? It’s a little elaborate, but not more than Olivia or Emilia. And at #467, it’s far more rare than you might imagine.

Lucia – The drawback to Lucia is that there are two clear pronunciations: loo shah and loo see ah. That said, it’s a lovely alternative to the wildly popular Olivia.

Sienna – This feels like a wild card, but maybe that’s just what you’re after. St. Catherine of Siena makes this just enough of a saint’s name. But it’s also quite current at #186, without being a true chart-topper.

Tessa – Or maybe Tessa? Choose your Saint Teresa with this one, as Tessa comes directly from the traditional name meaning harvest.

Vera – Vera comes with two meanings: faith, from the Russian origins of the name, or truth, from the Latin verus. I think it’s a great, vintage pick that’s nicely familiar without being wildly popular.

I do think you should use absolutely use Elliott as part of your daughter’s name – first or middle. Clara Elliott? Sienna Elliott? Or back to Emilia Elliott, maybe?

Or, of course, her first name could certainly be Elliott. With the nickname Ellie, it’s perfectly feminine. And what a great way to keep your family’s heritage represented in the next generation!

Let’s open it to readers: what would you name a sister for Marcus Gordon and Mason Anthony?