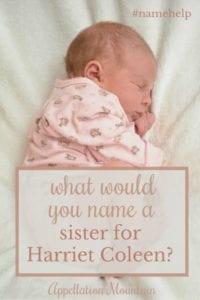 My husband Mark and I are expecting our second daughter, who will be joining Harriet Coleen (middle name after her grandmother). Our daughter is three and we love her name more and more every day. We are looking for something similarly strong and feminine for her sister.

I am American, and we live in the US. Mark is Australian and British. He likes more mainstream names while I prefer more unusual. When we decided on Harriet he had no idea how uncommon it was here.

If I’m being really picky I would also love the first, middle, last to have 3-2-1 syllables like Harriet’s name, since I love that flow.

I feel like we’ve been through all options with few sticking:

– Harper is the current front runner, but doesn’t get me excited. Our last sounds like Birch and I worry together they are too harsh. Also worry about echoing the “Har” beginning. My husband is entirely sold
on Harper.
– Helena (hel-AY-na). I love it, he insists it sounds too Germanic.
– Margaret. I love the strong and feminine connection but a few negative personal associations are holding us back.
– Charlotte. He loves this. I feel it’s too dainty and perfect for a real girl.

Help! Or help me understand that sometimes it’s okay not to have a name that you are head-over-heals I love with.

Read on for my response, and please share your thoughtful suggestions in the comments.

Almost everything about parenting is easier the second time around, but somehow naming? It gets tougher. You’re wise to recognize that you may choose a name that you like a lot, but don’t absolutely love. Happily, it doesn’t mean you won’t fall more and more in love with the name as your child grows. There’s something about having an actual child wearing the name that changes our perception, and takes it from name-that’s-just-fine to name-of-my-cherished-daughter status.

That being said, let’s try to find some options that do knock your socks off!

I share all of your hesitations with Harper, plus one more: it is very popular. If it were your all-time favorite, maybe it would be worth overlooking that it’s quite close to Harriet. While it’s undeniably strong and smart, it’s also modern and unisex – which means while it’s very close to Harriet sound-wise, but it also miles apart style-wise – so far that I’d be surprised to hear them as sister names.

Still, if you loved it, these things would be features, not bugs. And you’d be over on Etsy ordering personalized name art for Harper’s nursery, instead of writing to me.

Helena, Margaret, and Charlotte all seem much closer to the mark, but again – they’re not The Name, are they?

I’m going to cheerfully ignore the “too Germanic” comment. Our partners, even when their backgrounds are very similar to our own, come at naming with their own sets of assumptions and experiences. Helena is decidedly not Germanic – it’s the Latinized form of a Greek name, used in nearly every Northern and Eastern European language. So I’m going to hear that as a general “I don’t like it” statement and blithely suggest some names that do, indeed, have Germanic roots.

So let’s look for strong, feminine names, almost certainly with three syllables, that sound like Harriet’s sister. The name should be familiar, but preferably not too common.

Adelaide – Because Harriet isn’t Hattie, I assume Adelaide would not be Addie? Because Addie names are common, while Adelaide remains relatively rare. (It ranked #258 as of 2016.) Yes, it comes from Germanic roots – the two name elements mean noble and type, which is a pretty cool meaning. It’s been worn by saints and queens, and has a strong, distinctive sound.

Beatrice – I feel like you must have considered Beatrice, right? At #559, it’s nicely uncommon, but still generally familiar. It has the same vintage qualities and strength as Harriet.

Caroline – If Charlotte seems too dainty, does Caroline satisfy? They’re both feminine forms of Charles, but Caroline is less popular – #56 to Charlotte’s #7.

Eleanor – Eleanor is the epitome of strong girl names. I mean, Eleanor Roosevelt! I’ve written a series about similar names. (Read Part I here and Part II here.) And yes, Harriet is on that list, and Margaret, too. At #41, Eleanor is far more common than Harriet – but still feels like a pitch-perfect sister name.

Emmeline – Just like Adelaide could blend into all of the Addie names, Emmeline might get lost with all of the Emmie names – but only if you shorten it. Otherwise, it seems like an obvious sister name for Harriet. It appears on this list of Suffragette Names. So does Constance, which I would have suggested save for the three-syllable preference.

Matilda – Matilda is far more popular in the UK than the US, so perhaps that will appeal to your husband? It also reminds me of Helena in many ways. Plus, the meaning? Strength in battle. That’s a worthy sister for Harriet!

Meredith – Some dismiss Meredith as dated, and it did peak in the 1980s. But Meredith never even reached the Top 100! It’s nothing like, say, Brittany or Heather. It’s Welsh in origin, and has a strong, but still feminine sound. At #531 in 2016, I think it’s one of those overlooked names that everyone recognizes, but no one uses.

Vivian – The downside is that Vivian is much more popular – it ranks #95 as of 2016. And yet, I don’t know if that’s too common at all. The meaning – alive – is appealing, and the sound is powerful.

A few choices that didn’t make the list include names like Evelyn and Amelia. I’m not clear if you want to avoid popular, but since they’re Top 20 names, I’ve decided to leave them off.

I’m not sure if you have a family member to honor with your daughter’s middle name, but I wonder if Charlotte or Harper might work as a middle name?

I like both Vivian Harper, Matilda Harper, and Emmeline Charlotte quite a bit – but I think there are lots of combinations that could work nicely. And, of course, if you have a family middle waiting, I’m sure there’s a great combination with that name, too.

Now, lastly, a note on whether it’s okay to like, but not love, your child’s name.

The short answer- yes! Absolutely. I was talking with a group of experienced moms the other night, and one described naming their younger son this way: “It was the best name we could agree on.” So simple, but so true. Naming is almost always an act of compromise – but then, so is everything in a successful marriage. And there’s power in knowing that. Will you have the most swoon-worthy, Instagram hashtag-worthy name for your child? Maybe, maybe not. But finding a name that you and your partner can give together, in love and optimism for a long and happy life? That’s enough.

I always say “use the name you love.” What I mean by that is this: do not get talked out of your top choice because others say it’s too weird, or too popular, or you kid will hate you someday. Such prognosticating is pointless, and it tends to be shorthand for “that’s not the name I would choose.” But it also does not mean that you MUST love the name on the day you bestow it. Choose a name with good reason and enough information to know it satisfies your wishlist, and understand that your love for the name will grow with your child.

Readers, what would you suggest for a strong, but feminine, name for Harriet’s sister?