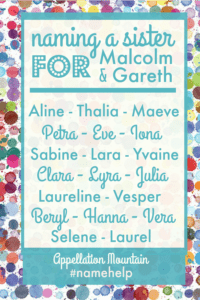 I love your Name Help feature and … it’s finally time, after years of reading, to ask for help for myself!

I have two sons, Malcolm Alexander and Gareth Christopher. We’re expecting number three and it’s a girl! Which completely threw me off, because I was certain it was a boy. I had a name picked out
already (Lewis).

My husband and I have always found naming our boys fairly easy. Girls are a different story. We’re struggling to find a name, any name, that gives us the “aha” feeling we got with the boy names. For the most part, we want what most people seem to ask for: a familiar name that’s not common. But we’re picky! We like names with history, and even better, names with a ‘hero’ or ‘heroine’ factor, something that maybe isn’t obvious to everyone but speaks to our shared, slightly nerdy
interests. Malcolm made us think of a leader with a heart of gold and unorthodox methods, because of the TV show Firefly, and Gareth reminded us of the steadfast, humble, easygoing knight of Arthurian legend.

When it comes to girls names, it seems like we’re perhaps a bit more conservative than with the boys. Names we like include Clara, Lyra, Julia, Aline, Thalia, Maeve, Eve, Petra, Iona, and Sabine. Our taste runs towards the feminine but not frilly.

I’d love something that matches the boys’ names, but it isn’t necessary. We both agree that we love Vesper, but can’t picture calling our child that. Names that represent personal heroes, like Jane and Elizabeth — I just don’t like the sound all that much. And Louisa, despite my love for Lewis,
is a name that I just don’t like!

Complicating matters further: we have a short last name that starts with a vowel. It rules out certain first letters: D absolutely, likely H, B, and F.

Please help us! It feels so unsettling not having this kiddo’s name picked.

It sounds like you’ve found your naming groove for sons, and it seems like you’ve got a pretty solid idea of the qualities you’d like in a daughter’s name, too. Still, it’s often harder to name a second or third child.

Waiting for that ‘aha’ feeling is understandable – and yet, lightning doesn’t always strike.

So far, you’re proceeded logically, identifying qualities you prefer and finding names that meet that list.

I wonder if that means you should look for something slightly different. There’s no rule that says sibling names need to sound like a perfectly matched set. And sometimes the guidelines we give ourselves for choosing a name lead us away from some really good choices.

Maeve came to mind before I read your list; and Vesper, I think, could work well. But Vesper strikes you as a little too different.

But none of the more traditional feminine names – Clara, Julia, Eve – seem quite right, either.

Let’s try a few more ideas and see if anything feels right.

Beryl – Beryl is a gemstone name and a Sailor Moon character, but I was thinking of Beryl Markham. Markham became the first woman to fly solo across the Atlantic, east to west, and published a best-selling memoir about her adventure. And that’s only a small piece of her unconventional and adventurous life story. If the sound isn’t a deal-breaker, I think Beryl works well with Malcolm and Gareth.

Hanna – Have you seen the 2011 movie starring Saoirse Ronan? I have not, but I know a family who named their daughter after the character. She’s quite fierce, from what I understand. The name, however, is plenty mainstream and feminine. It would never strike anyone as an out-there option. (Though the Hannah spelling is significantly more common, and that could be a headache.) I know H is on your maybe-not initials list – but I like this one enough to suggest it anyway.

Lara – The Tomb Raider character makes this one tough, but Lara seems like a traditional, feminine name. But there’s also the Doctor Zhivago tie. Plus, Lara feels nicely pan-European and familiar in the US without being widely used. It’s a slightly more mainstream alternative to Lyra.

Laurel – If not Lara, maybe Laurel? The Arrow character brought it to mind, but it has some other great imagery. Laurels symbolize victory and achievement, from ancient days to our own times.

Laureline – This one comes from the French sci fi comics, Valerian and Laureline, recently adapted as a movie by director Luc Besson. It wasn’t a huge hit, but the comic books have decades of history behind them. It reminds me slightly of Lyra, and while it’s longer and potentially more feminine, I think it stays on the right side of frilly.

Selene – Was Sabine inspired by the Star Wars character? It’s such a gorgeous name, and feels like a logical sister for Malcolm and Gareth. But if it’s not quite right, Selene has a similar sound, plus ties to two heroic characters – Selene of the Lunar Chronicles YA novels, and, of course, the Underworld series.

Vera – Vera comes from the Russian word for faith, but reminds us of the Latin verus – truth. It feels vintage like Petra, familiar like Clara, and shares the V of Vesper. But maybe it’s too close to your name?

Yvaine – Okay, Yvaine is rare, by any standard. And it’s of recent coinage. Neil Gaiman first used it for his heroine in Stardust, played by a young Claire Danes. The movie became a cult favorite of sorts, so plenty of people will recognize it. Gaiman probably based the name on Owain and Yvain, giving you a tie-in to Arthurian legend, too. But it feels feminine and unusual – possibly an alternative for Vesper.

Overall, I’m still most drawn to Maeve from your original list. But of my suggestions, I really like Beryl. It sounds like the kind of inspiration you’d like for a child’s name, and hits the right feminine-not-frilly, familiar-not-common note. Maeve Eleanor, maybe? Or Beryl Victoria?

But I feel like I’m leaving dozens (and dozens!) of options still out there, so let’s open this up to the readers.

What would you name a sister for Malcolm Alexander and Gareth Christopher?