Olga and her husband are expecting their first child. They don’t know if it’s a boy or a girl, but they do know that they need help choosing a name either way!

If the baby is a girl, the problem is finding a middle name for Iris.

The middle names I was learning toward prior to deciding on Iris were also ‘thing’ names – Pearl and Moon, for instance. I didn’t like how they made Iris appear like an adjective. So I began the search for ‘name-names’ and all we agree upon is Claire. Which we both love, but I am not sold at all for a middle name– in fact, I secretly want to keep Claire open for a future daughter!

Other middle names we considered: Ofelia, for my grandmother, which my husband isn’t that into. My husband loves Vivienne but I am not so sure. Aaaand that’s about it.

If the baby is a boy, the problem is that I’m not sure I like our agreed-on first name. Plus no definite middle.

For a boy, we have agreed on Jasper. Which I have always loved, but now feel torn on, and really without much reason at all. Maybe because Jasper has a bit of a country-feel to me, whereas all the other names we had considered– Alastair, for instance– very much don’t. The reason why I let go of Alastair was because it didn’t flow so well with our surname.

And middles! I considered Apollo for my grandfather, but my husband thinks it’s too “out there.” I also have thrown out Benjamin for his brother, who we lost in a tragedy not long ago, but my husband, though agreeable about it, doesn’t sound enthusiastic at all. I have thought about Ivan, my husband’s grandfather (whose birthday is the baby’s due date) but it doesn’t flow well with Jasper.

Their surname sounds like Gilligan, “with a lot more Ls.” Meaning that names with dominant L sounds are out. Because their last name is long, they tend to prefer two-syllable names. A few other names that they’ve already discarded: Amelia, Indira, Luna for girls, and Cedar and Viggo for boys.

Please read on for my answer, and share your thoughtful comments and suggestions, too!

You’ve clearly given this a lot of thought – and that’s a good thing. I agree that you’re wise to stay away from L names, and the shorter, two-syllable names that you favor seem to go well with a last name like Gilligan.

Let’s start with the easier challenge: finding a middle name for lovely Iris.

My first reaction was to try to talk to you into Iris Pearl or Iris Moon. Because Iris feels like such a well-established given name to me, I’m not sure that the adjective potential is a problem. I’d like to ask the readers what they think, too, so let’s do that now. 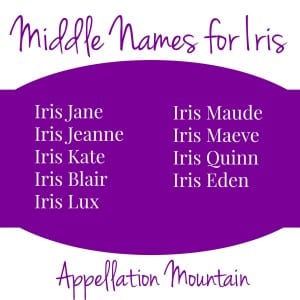 But let me also acknowledge that no matter what the poll says, you’re not on board with a double-noun name. So let’s brainstorm names like Claire, but not.

It does seem like some of the middle names you’ve considered are longer. And I don’t think you need to limit yourself to a shorter middle. I’m tempted to brainstorm longer middles, but let’s leave that to the comments for now.

On to the boys!

The first question is whether to keep Jasper or let him go. It’s a tough call. Jasper is one of those names that I truly do adore. It’s about as popular as Iris. And, like Iris, it has ties to the natural world without being super hippie-granola. 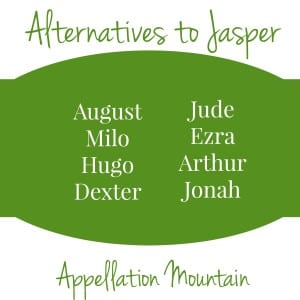 So Jasper seems perfect. Until you mention Alastair. Because Alastair is much more of a little gentleman name. Not that they couldn’t be brothers. But it doesn’t seem like an obvious pair. A few names that seem to be somewhere between Alastair and Jasper: 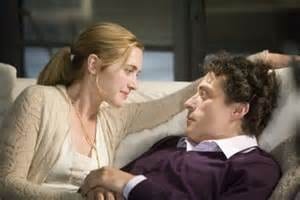 If none of those feel right, or even like they could be slightly closer to your son’s name, then maybe Jasper is the one. English actor Rufus Sewell played a character called Jasper in The Holiday. He’s kind of a rat who breaks Kate Winslets’ heart, but I think it shows that Jasper can work on an Alastair-like guy.

As for middles, may I suggest Bennett? I’m so sorry for your loss, and it seems like using your late brother-in-law’s name would be a lovely way to remember him. Every family approaches this differently, but I can see that some might hesitate to use a name that is still so strongly associated with a recently departed loved one. Another Ben- name could honor your brother-in-law’s memory, but might soften any pain associated with using the same name.

Apollo isn’t quite as out-there as your husband might think – it actually ranked in the US Top 1000 in 2013. But that probably won’t sway him.

If Ivan doesn’t work, would you consider another form of John? Or another family name?

It also seems like you could mix and match lots of the names on this list: August Jasper, Hugo Dexter, August Jude.