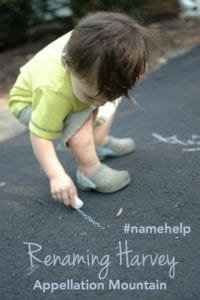 Name Help is a series at Appellation Mountain. Every week, one reader’s name questions will be discussed. This is a special post prompted by the devastation of Hurricane Harvey. Proceeds from the post will benefit Texas Diaper Bank.

My husband and I decided on a name just a night or two after finding out we’re having a boy, about 6 weeks ago. We had been using it privately and felt like it fit perfectly and we were glad to have a big decision out of the way.

But after recent events, it feels inappropriate to name our new son Harvey!

My in-laws in Houston are thankfully safe and staying dry, but we don’t want to saddle their grandson with a name that reminds them of the hurricane that’s harmed so many of their neighbors and friends. Can you help us think of replacements?

We liked Harvey because it’s classic but a bit unusual. Bonus points for it having a secular Jewish feel without being super Biblical. One backup we’re considering is R(e)uben.

No siblings to coordinate with and our last name is a long-ish hyphenate that starts with a hard G. Thanks!

Congratulations on your new son! And wow, what a story.

First, I’m glad your family is safe. But I agree that this name needs a rethink. Maybe if you lived in Minneapolis, with no ties to anyone south of the Mason-Dixon line, Harvey would still feel reasonable. Maybe. Katrina faded from use dramatically following 2005, and shows no signs of a comeback.

It’s surprisingly difficult to find substitutes for Harvey. First, Harvey is beginning to rise, meaning it still feels slightly edgy and uncommon, especially for a child. But everyone instantly recognizes the name and can spell it easily. That makes a great combination. Plus, Harvey boasts an awful lot of sound, if that makes sense, especially with that middle V.

I’ve avoided most Biblical names in favor of names from Harvey’s heyday, from the late nineteenth century through the 1930s. I’m struggling with the secular Jewish part – while I have a general sense of what that means, finding names that fit that category feels harder than I would have guessed. But I know there will be some readers who can weigh in on this subject.

Alfred – Tennyson, Hitchcock, Batman’s capable butler. Accomplished Alfreds are everywhere, and nicknames like Alfie and Freddie seem sweet and wearable. I keep waiting for Alfred to return to favor in the US. After all, Alfie has ranked in the British Top Ten. So far, though, it remains under-the-radar. Read more about Alfred here.

Bram – Because your last name runs longer, I wonder if shorter first names appeal? Harvey boasts a compact, complete sound. Bram could be short for Abram or Abraham. And while Bram has never ranked in the US Top 1000, it’s a favorite with the Dutch. The most famous Abraham is known as Honest Abe in the US, but it truly counts as an international name, and maybe one that hits the same mark. Read more about Bram here.

Clyde – Until the 1930s, Clyde appeared in the US Top 100. Like Harvey, it once read regular Joe, but now feels vintage and unexpected. Some parents might avoid Clyde because of the villainous boyfriend of Bonnie – though we’ve romanticized the criminal couple to the point that probably doesn’t count as a detraction. Besides, the name was so popular for so long, plenty of men answer to Clyde. Read more about Clyde here.

Cy/Cyrus – Does Cy seem too short? Ever since Zoe Saldana gave the name to her son, I’ve been thinking it feels brief but complete. It can be short for lots of names, like regal Cyrus, woodsy Silas, or neglected Sylvester. (Darn that cat!) I think that leaves Cyrus as the frontrunner for a formal name for Cy, though I’m not sure if it feels too tied to the Old Testament. Read more about Cyrus here.

Ernest – Like many of the names on this list, Ernest comes from the same era as Harvey. One hundred years ago, it served as a Top 100 staple, as ordinary as Ryan or Luke today. Hemingway makes it literary; Wilde’s The Importance of Being Earnest reinforces the name’s virtuous vibe. (It comes from a Germanic word meaning serious; so does our word earnest.

Floyd – Floyd sounds like a brother for Clyde, another vintage name from the Top 100 of a century ago. Boxer Floyd Mayweather puts it in the spotlight today, and after years in style limbo, Floyd is rising in use. That’s where Harvey stood ten years ago.

Frank, Franklin – A few years ago, I found Frank hopelessly fusty. Today I think the name feels ready for revival. Surname form Franklin fits right in with all of those boys answering to Lincoln and Carter. While it spiked in use following the 1932 election of FDR, Franklin boasts a long and steady history of use. It feels vaguely vintage and nicely under-the-radar. Like Harvey, Franklin hovered just outside of the US Top 400 last year. Read more about Frank names here.

Harry, Harold – Jazz age chart-topper “I’m Just Wild About Harry” remains in the public imagination, even if we’ve mostly forgotten that it came from a 1921 Broadway musical. Harry tops the charts in the UK, where their famous exports include famous Harrys like Potter and Styles. In the US, it languishes in the upper 600s. Harry originally comes from Henry, a classic boy name favorite of the moment. It can connect to the very vintage Harold, which feels like another ready for revival choice. Read more about Harry here.

Howard – I’m on an H spree, because, well, Harvey. But Howard could be one of those fits-in, stands-out picks. Originally the surname of a well-connected English family – Catherine Howard became the ill-fated fifth wife of King Henry VIII – it has been a given name for so long that we’ve forgotten all that. I like the idea of Howie as a short form, but I’ve also heard Hoby as a nickname for Howard. Read more about Howard here.

Humphrey – Too much with the H names? We’re naming our daughters Audrey and Ava, so why not some more men’s names borrowed from old Hollywood? Humphrey Bogart makes it dashing, and the name fits the same general traditional-not-common profile as Harvey.  Read more about Humphrey here.

Monty, Montgomery – Monty – or possibly Monte – stands on its own, though Montgomery makes for a dashing longer form. Actor Montgomery Clift inspired a surge in the name’s popularity around the 1960s, but the name boasts a long history of use. Isla Fisher’s son is named Montgomery. Read more about Montgomery here.

Morris – If Montgomery is close, but not quite, how ’bout Morris? Unlike Montgomery, it requires no nickname. And while it fits with popular surname picks like Harris and Brooks, Morris feels distinctive and different.

Simon – I don’t know if Simon feels like a secular Jewish name, but I do think of it as a quirky traditional. Simon belongs with classic boy names, and yet it feels a little offbeat, in a good way. Simon could easily be an artist, a writer, an athlete, a scientist – or some combination of the above. Read more about Simon here.

Solomon – Saul and Sol keep coming to mind, and yet I wonder if Solomon feels to specifically religious to you? Still, Solomon has gained steadily in use in recent years without reaching Sebastian-Alexander levels. It might be a great alternative to Harvey.

If I listed my favorite Harvey substitutes, I’d probably go with Franklin, followed by Ernest and Clyde. But Ernest and Clyde strike me as a little more daring than Harvey, while Franklin hits the sweet spot.

Readers, I know you’ll have some great suggestions for Kelsey. What would you use instead of Harvey?

Also, if you’re looking for a way to help with disaster relief efforts, Kelsey suggested the Texas Diaper Bank, which coordinates with other disaster relief organizations to get diapers to families in need. I’ll be donating the proceeds from this post to the organization. Online donations can be made here.