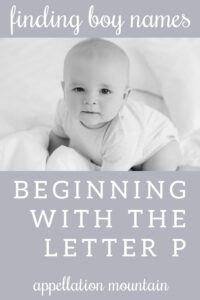 Our son is due in the beginning of March! We’re really excited to meet him, but I’m writing to you because, as of right now, he really doesn’t have a name.

Early on, we decided we want to use a name beginning with P. It would be for my grandmother Pam (Pamela) and my husband’s grandpa Paul.

Somehow I was convinced this baby was a girl, and we were all set to name her Penelope. We had a few others we liked, just in case, but I’ve always loved the name Penelope.

But then we found out it’s a boy. And I feel like there aren’t any great P names.

We could just drop it. No one knows about the honor name thing except for us. But dropping it feels … maybe like quitting? Or maybe it just opens up Every Possibility on Earth Again, when I thought we’d narrowed it down already.

So often we have the Exactly Right Name chosen … only to find out that our imagined Luca is really a Lyla.

The trick, I think, is to focus on two things:

First, is there a reason to reserve your favorite name? If you’re young(ish) and hoping for future children, sometimes holding on to that name might make sense. Which could, of course, rule out using Josephine because you might have a Joseph in another few years.

But I tend to argue against saving names. In part, because the future is uncertain. And names often feel like they belong to specific moments.

Without knowing any more details, my sense is that honoring your loved ones matters now, with this child. And that’s why you’re not ready to move on from the letter P.

Second, what qualities does your favorite name possess? Since there’s no obvious masculine form of Penelope, we have to think about it more broadly.

There are bunches of classic P names for boys, of course: Patrick, Peter, Paul (as in your husband’s grandfather), and Philip/Phillip come to mind.

But I think you’re looking for something like Penelope. A contemporary name, one that feels current – even if it has history galore.

P NAMES for a BOY

A surname version of Patrick, Padgett might fit right in with Beckett and Everett and Elliott.

A surname name with an outdoorsy vibe, Parker ranks in the current Top 100.

It’s a surname name with plenty of history. While it’s not related to the Latin word for peace, pax makes it seem connected.

If there is a masculine form of Penelope, maybe it’s Penn? It’s a lot like the popular Finn. Penn brings to mind actor Penn Badgley, and, of course, William Penn, founder of Pennsylvania.

Speaking of Finn, Phineas is a possible P name for a son. But it shortens to Finn. So it’s sort of a both-and-neither answer to the question.

A surname form of Peter, Pierce is handsome and polished. It fits right in with names like Reid and Royce.

Another name in the key of Parker, Porter could be another possibility.

Preston caught on in the 1990s and remains in steady use. There’s something nicely buttoned-up about it, a blue blazer kind of name.

Overall, my favorite is Paxton. I think it hits the right note – current, but with history. A great sound. And so much meaning!

With Penelope, you had two things – a name you really liked and an honor name for two important people in your life. It sounds like you’re prioritizing finding a potential honor name. And that might mean that it takes a little longer for any choice to feel really like your child’s name. Maybe you haven’t thought about it for nearly as long as you had Penelope in mind. Or maybe it’s just a question of re-adjusting your plans and expectations.

But, in time, I think a name like Paxton could end up being every bit as meaningful for your new arrival.

Readers, what would you suggest for a P name for a son?