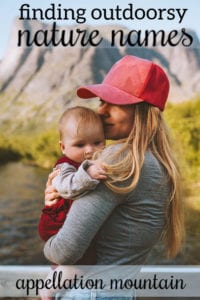 My husband and I are expecting our first child in July, and we could use some help with names.

We love to hike and camp and pretty much be outside in the wilderness. I love the idea of choosing a name that reflects our shared passion. (We met on a whitewater rafting trip in college.) My husband likes the idea, but worries that our kid’s name will be too hippie, or just too weird.

I feel like I’m hearing lots of kids with names like this right now, but I’m not sure how to pick one that seems like a normal name.

We’d like the middle names to be Eleanor if it’s a girl (my name, but I’m named for my grandmother, and I’d like to honor her) and Anthony (for his dad) if it’s a boy. We might also consider Robinson, a family name, for either, but I wonder if the Robin part is too much with a nature name?

Last name is one syllable and pretty common. Think Gable and Kent.

But I hear what your husband is saying, too. Some names feel like a subtle nod to a shared passion. Others feel like they’re an attempt to brand the baby. Finding the right level is a very personal decision, one that only you and your husband can make.

There are a few good places to start:

Now, on to the list. I’m going to mix all three categories together.

August – A traditional masculine choice with a big meaning, but also a relaxed, summery vibe.

Forrest – Forrest was once a name for someone who lived near a royal forest, or worked as a groundskeeper at one. Today it feels traditional, but undeniably outdoorsy.

Kai – Kai means sea in Hawaiian, which makes it very much a nature name. But because it’s not a word name, it’s a little more subtle. And it sounds modern, too – Kai first charted in the boys’ Top 1000 in 1979.

Parker – A surname name, like Forrest, for someone employed as a gamekeeper. Today it feels preppy and polished, but also brings to mind all things green and growing.

River – This is the textbook definition of a name that could’ve felt super flower-child not so long ago. Today? It’s a solid Top 200 favorite for boys. (And gaining in use for girls, too.)

Rowan – Like River, Rowan is climbing for both boys and girls. (As of 2018, it’s more popular for boys.) While this is a tree name, it’s not quite as familiar as Oak or Elm. Another bonus? It’s also an Irish surname, so Rowan is a little more under-the-radar than, say, Cedar or Moss.

Silas – A New Testament name, Silas comes from the Latin name Silvanus, from sylvan – the woods.

Wilder – Like Parker and Forrest, it’s a surname name that connotes the wilderness.

Aurora – A goddess, but also the personification of the dawn, Aurora sounds like a name. Another bonus? The Northern Lights, also known as the Aurora Borealis, lend this name a certain drama.

Ember – Amber was a hit in the 80s, but it’s fiery Ember that feels like the right choice for a girl who will grow up around the campfire.

Hazel – A vintage name with modern appeal, Hazel is a color and a tree name, too.

Ivy – Short and simple, Ivy connotes achievement – think of the Ivy League – but also the outdoors.

Juniper – Juniper has more history of use that you might guess, and, like River, it feels mainstream in 2020. (And this one is just fun to say!)

Stella – From the Latin word for star, Stella is perfect if you love the night sky. It’s also common enough that no one would hear it as hippie.

Willow – A pretty name, currently in the US Top 100 for girls. That makes it plenty mainstream – even though it would’ve been surprising even twenty years ago.

My favorites are Rowan for a boy and Juniper for a girl. Rowan Anthony is great … but Juniper Eleanor isn’t quite as strong. Would you consider Juniper Ella, Juniper Elle, or Juniper Lenore? And, of course, Juniper Robinson is great, too.

Readers, what would you suggest as mainstream nature names? 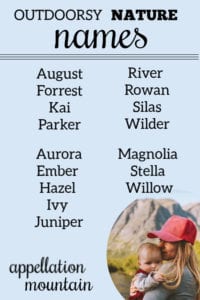