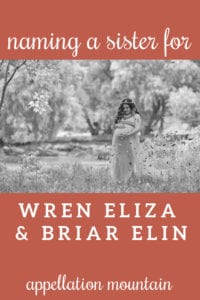 We have two daughters, Wren Eliza and Briar Elin, and we’re expecting a third daughter in October. I love being mama to these sweet, crazy girls, but I’m feeling stuck when it comes to a name.

Outdoorsy names are our “thing.” Nature names seem to be mostly flowers and trees, or maybe birds. Because we have one of each kind of name already, we’d like something a little different.

We don’t like fussy or girly names, we also don’t want anything that seems like it’s meant for boys. (Especially because people seem to assume that we must be “trying for a boy” this time.)

So far our list is Ember, but I don’t love it with Briar. Also, her middle name has to start with El (a family thing!) so Ember El… might be a lot of E.

We’ve always liked that Wren and Briar are a little different, but not necessarily Kardashian-level different.

Is there a third name out there that goes well with Wren and Briar and works with all of my crazy rules?!

And what a fun challenge. (Easy for me to say, right?)

I think you’re on the right track with Ember. It’s clearly a word name, and one that brings to mind the natural world. It feels feminine, but tailored.

Still, I do wonder if eliminating all flower/tree names might be a little extreme?

Here’s what we’re looking for:

That does leave lots of options. Colors, weather, gemstones, spices, water, night sky names … I think quite a few possibilities exist, even if we avoid every flower and tree name. But I think some really, really good flower and tree names feel different enough, so I might sneak one (or even two!) on to my list of suggestions.

Autumn – You’re due in October, so Autumn feels like a natural name. It’s more common than Wren or Briar, but not by much. And it fits perfectly – feminine, tailored, and clearly borrowed from the natural world without repeating a category.

Bay – River belongs to the boys, but Bay tends to read feminine, or at least unisex. That’s because television series Switched at Birth followed a teenager named Bay Kennish. It’s much rarer than Briar or Wren, but it fits your family’s style.

Clover – Does this count as a flower or tree name? It’s a flowering plant, technically. Maybe it’s too close to Briar, either in meaning, or maybe in that shared -r ending. But it’s an upbeat name that signals good fortune, and sounds just right with your girls’ names.

Jonquil – No question, Jonquil is a flower – usually yellow, a cousin to the daffodil. But unlike Lily or Rose, few are using it as a given name. In fact, this might hit Kardashian-level different. Except we’re living in the age of Marigold and Azalea, so I think Jonquil fits.

Lake – Lake has more history of use than you might guess. Actor Lake Bell puts in on the girls’ list, but it’s used as unisex, in sparing but steady numbers, since the early twentieth century.

Meadow – A meadow might be full of wildflowers, but it’s a habitat – a category of nature name you’ve yet to consider. Plus, it has a different ending sound that Wren and Briar, which is pleasing, and feels comparable in terms of popularity, too.

Sage – It’s a color name and an herb, with the bonus meaning of wisdom.

Vale – A poetic term meaning valley, Vale isn’t quite as obvious as Wren or Briar, but I think it works.

Overall, Meadow is my favorite. I think it answers every one of your requests, and would pair well with an El- middle.

But I know there will some great suggestions from the community, so let’s open it up for comments.

Readers, what would you name a sister for Wren and Briar?