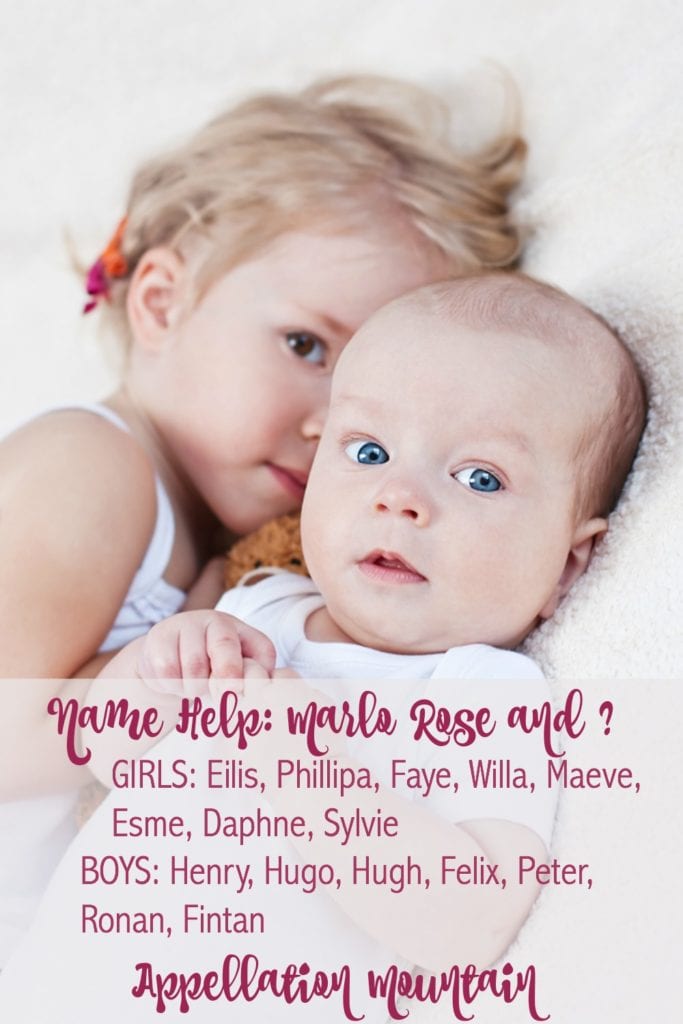 I have followed your site forever, and am so excited to possibly get some suggestions from you for baby #2. I feel like we’ve got a few ideas, but nothing is set in stone.

After conducting almost all of my job over the phone, I’ve come to appreciate unique but pronounceable names. We have a daughter named Marlo Rose (I think I regret not spelling it Marlow, but my husband was firm!) and will not find out the gender of baby #2.

We’ve toyed around with the idea of naming all our girls with flower middle names, and any boys with water/nature names too … but that’s not a dealbreaker. I love Celtic, Irish, and Greek names, my husband prefers slightly more traditional American names.

For a girl, here are names we’ve played around with in any combination/no particular order: Eilis, Faye, Willa, and Phillipa. The middle names that have sounded okay with us so far are Iris and Violet, but we’re open.

For a boy, we’re a little more stuck. Our favorite names are as follows: Hugo or Hugh, Isaiah, Samuel, Henry, Levi. For middle names, I want to like Hudson (like the river) or Hilton (Hilton Head Island) because of family ties, but I’m not crazy about them – ha! Maybe with the right first name? With Samuel, we like Finn as a middle.

What do you think? I just can’t wait to see what you’re able to come up with!

I think your shortlists are great – though I also wonder if some of the names really match up with your criteria.

Years ago, I heard the phrase phonetic transparency – names should be read as seen – and I think that’s what you’re describing. After all, Marlo could be Marlow or Marlowe, but none of the spellings are confusing. Mahrleaux, on the other hand, would be … complicated.

Popularity is a little tougher to pin down. Marlo was briefly popular in the 1960s and 70s, thanks to actress Marlo Thomas. But despite some high profile uses, Marlow and Marlowe remain outside of the US Top 1000. The other girl names on your list seem consistent with your desire for something uncommon.

But the boys’ names? The good news is that they all pass the phonetic transparency test with flying colors.

You’ve shortlisted some really stylish choices! Isaiah, Samuel, Henry, and Levi are all great choices, a mix of classical and Biblical picks – or both. But they’re all in the current US Top 50. That doesn’t mean your son will be one in a crowd with any of these names. We know three Sams, two Henrys, but only one Isaiah and no Levis. As they say, your mileage may vary. But the numbers suggest that all of these names are more likely to repeat.

Only Hugo and Hugh could be considered less common.

Let’s take a closer look at the possibilities.

Names for a Girl

Eilis is a lovely name, and Saoirse Ronan’s character in Brooklyn gave it a boost. Except it fails the phonetic transparency test. I really, really don’t want it to. But it does. You can certainly still use it, but I think you need to recognize that you’re going to spell this one maybe more often than you’ve ever had to spell Marlo. On the plus side, Marlo and Eilis sound like sisters to me.

Phillipa seems like a good choice, but I wonder about two things. First, would you use a nickname? Second, are you set on this spelling? Philippa – two ps – is the spelling used by Pippa Middleton, and while neither form is common, it’s my default. (Readers, I’d love to hear if you disagree!)

That leaves Faye and Willa, and I think they’re the strongest two choices. True, Faye can be Fay or Fae, but the -ye spelling is most common. Marlo and Faye feel vintage, but in a brisk, tailored way. Willa is an equally strong sister name for Marlo, but I think it’s a little more conventional a pick than Marlo. (And it’s just inside the current US Top 500.)

Other names to consider include:

Names for a Boy

Here’s the question with boys’ names: are your criteria the same as for girls? It sounds like your shortlist is different, in terms of name origins, as well as popularity.

There’s nothing wrong with this – I think it’s actually pretty common for parents to be slightly more conservative when naming boys. And I love the sound of Henry as a brother for Marlo. If popularity weren’t a concern, I’d absolutely put Henry at the top of the list.

Instead, your interest in something less common points to Hugo or Hugh. While both names are in the current US Top 1000 and rising, Hugo is just within the Top 500, and Hugh all the way out in the 840s. That’s not exactly Liam.

Normally, I’d say that Hugo is your name, except I wonder about how it sounds with sister Marlo. Or, maybe I should say this: if you had a third child, would you feel pressure to find another ends-with-o name? If you think the possibility of a third child is remote, or you’re not concerned about such things, then Marlo and Hugo are great together.

Marlo and Hugh are great, too – and I can imagine a little Hugh answering to Hugo as a nickname.

One other hesitation: Hugo Hudson and Hugo Hilton might not appeal to you. I actually love the names – Hugo Hudson gets my vote – but alliteration is not for everyone.

Let’s take a look at some other possibilities:

From your list, I really like Henry. Henry Hilton, or maybe Henry River, if you want something more obviously tied to the natural world? Except I bet you’ll meet other little Henrys, and that sounds like something you’d rather avoid.

That leaves Hugo, and I do think Hugo Hudson – or Hugh Hudson – is great. I also think Felix Hudson could be a great choice for Marlo Rose’s brother.

Readers, what would you suggest for a sister or brother name for Marlo Rose? Am I wrong about Eilis being tough to pronounce? Do you think Henry is too popular?