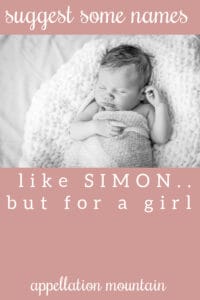 We found the perfect name for a boy – Simon! Traditional, smart, everybody knows to spell and pronounce it, but he wouldn’t have to be one of three in his class. Plus, my husband is a big fan of Simon Pegg from way back when he made Shaun of the Dead. Perfect, right?

Sure. Except we’re having a girl!

What’s the equivalent of Simon for a girl? We don’t want to use Simone because we might have our Simon someday.

Simon is a great name for a boy, for all of the reasons you’ve mentioned.

Happily, there are plenty of traditional girl names that feel just a little different, too. In fact, there might be more girl names in this category!

Let’s find some appealing possibilities that would work with a possible future brother named Simon.

Adeline is a Top 100 cousin. And Addie is familiar as a nickname for Addison, too. But regal, traditional Adelaide stands a little bit apart. It’s strong and smart, with history to spare.

Sound-wise, Celeste is similar to Simon. But it’s distinct, too, a pretty, vintage name that suggests stargazing.

Originally an Elizabeth nickname, Elise has stood on its own for years. It’s been used in song by everyone from Beethoven to The Cure. Timeless and tailored, Elise could be the perfect sister for Simon.

There’s something serious and capable about Frances, without feeling too heavy. Frances is the sweet badger of bedtime stories by Russell Hoban and talented actor Frances McDormand, too.

A form of Mary used in the Old Testament, Miriam sounds old-fashioned and vibrant. It’s also the given name of the title character on The Talented Mrs. Maisel. (Though she often answers to retro nickname Midge.)

A name from Greek mythology with a lovely meaning: bright. Phoebe is the name of a small bird and at least two very well-known television characters. Despite that, it feels less like a trending possibility and more like an overlooked gem.

There’s a bounce to Veronica – it’s just plain fun to say! With centuries of use, Veronica is impossible to date to a decade. Like Simon, Veronica could be two years old, or 72.

William is an impeccable classic, but the feminine form has remained somewhat unsettled. Wilhelmina feels a little long; Willow, a touch modern. But Willa gets it just right. It fits with Stella and Bella, but feels a little more modest than those dramatic names.

Overall, I think Veronica and Elise are the obvious choices. But I can think of lots of names that work.

Over to you, readers – what girl names sound like sisters for a possible future brother called Simon?