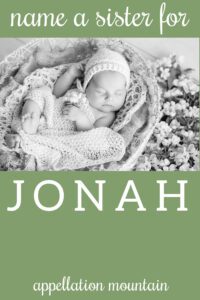 My husband is Joseph Albert III, called Joe by everyone he knows except his family, where he is always and forever Joey. His dad is Joe, and his grandfather is Joesenior. Said just like that, all run together.

We decided pretty early that we wouldn’t have another Joe, but then I fell in love with the name Jonah. So our son is Jonah K***er (my maiden name, sort of like Chandler but a little different) Light-with-a-Br.

Our second child is due in August. We’re not finding out the gender, and we have questions for a boy or a girl.

For a boy, we’ve sort of settled on calling him Alex. Can we name him just Alex? Or should it really be Alexander? The problem is that we agreed to use my maiden name as a middle name for all of our children and Alexander almost rhymes with K***er.

Also, Alex comes from the idea of using an Al- name for Alyssa and Albert. Is that too much? We really don’t agree on another boy’s name, so I’m not sure if it matters anyway!

The other boy name I really liked with Jonah was Everett, and we considered Jonah Everett before deciding on using my family name. Since then, my brother had a son named Everett, so it’s off the table.

If this baby is a girl, we’re feeling pretty undecided. I like Clara and Cora when I was pregnant with Jonah, but we found out he was a boy, so we never really talked about it much. I don’t love those names as much now, and I’m not sure anything else really feels right, either.

We talked about using Alex for a girl, but I’d only do that if she was Alexandra for her full name, which takes us right back to the middle name dilemma. And I’m not sure I’m really the kind of person to name a girl Alex.

My husband suggested Eden, but I’m not sure about it. It seems very religious with Jonah (we’re not particularly religious) and at the same time, maybe kind of trendy and new? Most of the names I find myself liking seem a little more traditional.

We’re definitely avoiding the Top Ten because our last name is already so common, but I’m not into really different names, either. Some names, especially nature names, sound crazy with our last name. My best friend named her daughter Ruby, which I love, but with our last name sounds like Rainbow Brite’s cousin.

One more thing: it bothers me when I get called Melissa instead of Alyssa. I know that I can’t control that, but it makes me want to avoid names like Layla/Lylah or even Lily. People are sometimes surprised to hear the name Jonah, but everyone pretty much gets it right, and I really like that about his name!

There’s a lot to unpack here.

First, Jonah to honor all of those Joes is so clever! I love it. And using your maiden name as a middle is a good choice, too – a way to include both families’ histories in your child’s name.

Let’s stay with the boy names a minute here, because I think this is the easier question to answer.

Yes, you should name your son Alex.

Most Alexes are Alexander. But not all. Alexander has been in the Top 20 for years, but just Alex ranks in the US Top 200, too. Aside from occasionally explaining that it’s NOT short for Alexander, I can’t imagine much of a downside.

Well, except that it’s worth noting that Alex is  – maybe – more common than you’d like. But I think the pros probably outweigh the cons, especially because of the clever way it connects to both Albert and Alyssa without being too similar to either name.

And yes, you COULD name your daughter Alex. But it doesn’t sound like you want to.

Lots of girls end up called Alex. But named Alex? That’s fairly uncommon. (To put some numbers around it, 169 girls were named Alex last year, putting it well outside of the current US Top 1000.) Unlike Alexander/Alexandra, naming a girl Alex doesn’t feel terribly traditional, either.

There’s a lot of logic to naming your daughter Alexandra. Maybe her nickname would end up being Alex … or maybe something else. (Allie, Sasha, Alexa, Xandra …)

Except it sounds like you’re quite set on using your family name as her middle, and I agree – they’re not great together.

If you loved the idea of Alexandra so much, I suspect you’d cheerfully find another middle. And you could! Almost any other name from your side of the family might feel every bit as meaningful. This is even more true because you only have one older child. It’s not really a pattern, the way it would be if this was your fourth kiddo and all three siblings shared a middle, right?

But since that’s not a choice, let’s move on.

Are there other AL- names to consider?

I’d suggest Alexa for a daughter except there’s the AI factor. And maybe it’s closer to Alyssa in a way that’s not ideal. (Adding that extra syllable and the -a ending somehow makes me notice the similarity in a way I don’t hear with Alex.)

Other AL names to consider:

ALICE – Alyssa is a romance language take on Alice, but I think they’re different enough to work.

ALINA – I’m not sure if Alina meets your nothing-confusing criteria. I think it’s pretty easy to  mishear as Elena or spell Alena. But it’s also a great name in that familiar-not-common sweet spot.

ALLISON – I know, I know. Allison feels like a mom name. And yet, it fits in perfectly with Emerson and Addison. If it hadn’t been big in the 1980s, it would be huge now. Maybe it still works?

ALMA – An up-and-coming name with multiple meanings, including “soul” from Spanish.

Overall, I really like Alma with Jonah … but I’m not sure it’s quite your style. Alice and Jonah, though, could be spectacular.

What if we consider some non-Al names? I’m jumping off of Cora and Clara and Jonah and Everett and Alex, too.  Color names won’t work, along with any noun name that would make your surname sound too much like a description.

ELIZA – Nearly as traditional as Elizabeth, but with a spark.

HALLIE – Have you considered a name like Molly or Daisy? I think Hallie is a fresh, intriguing choice with a strong AL sound, but a different starting initial.

ROSALIE – As vintage as Jonah and well-matched, but not at all too similar.

THEA – A possible substitute for Cora and Clara.

But wait, let’s talk about Eden.

First up: I don’t hear Eden as particularly religious. Do I think some families choose it for the Biblical reference? Sure. But Eden ranks just outside the current US Top 100. That suggests broad appeal, well beyond any particular faith.

And Eden does check a lot of the boxes: there’s a single spelling. It’s good with the middle and surnames. And I like it with Jonah, too.

After all, Jonah is also a name with Biblical roots. If that’s never been an issue, I think Eden could be on the table. Though I do take your point: maybe Jonah or Eden isn’t especially religious, but siblings named Jonah and Eden hit a little differently?

My guess is that it’s not quite right for you, but maybe it’s worth another look.

I also like Hallie quite a bit, but maybe that’s too casual for you? I keep coming back to Alice, an undeniable classic that sounds great with Jonah, but is more storybook than Biblical and gives you the AL- beginning.

Readers, what would you name a sister for Jonah? And can you suggest any AL- names I’ve overlooked?