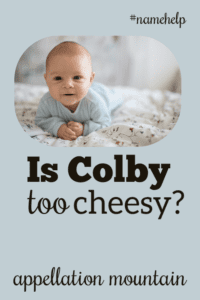 My partner and I are due in early May with a son. We don’t really agree on names, but we do agree on ONE name: Colby. It’s his mother’s maiden name.

We would use my dad’s name, William, for his middle name.

But when I shared it with others, it’s gotten a mixed reaction.

First, there’s the cheese. Which, yes, I know it’s a cheese.

Then a friend mentioned the family from Dynasty, which actually had their own show called, of course, The Colbys. My mom used to watch all of those shows, so I remember it. Which makes it … even cheesier?

Now I’m rethinking everything, but we don’t have another name.

In some ways, you’re facing the classic problem of choosing a name. There’s a choice that you love, and you have good reasons to use it. But it’s not completely, absolutely perfect. And that makes you wonder if, in the broad and deep recesses of the internet, there’s not Some Other Even Better Name that you’ve overlooked?

And if you do find Some Other Even Better Name a few weeks or months or even years after naming your son, will you be overcome with inescapable name regret?

Oof! No wonder it’s tough to settle on just one name.

At times like these, the best approach is to apply cool logic – even when this is terribly challenging.

First up: the cheese.

According to Cheese Wiki – yup, that’s a thing – colby cheese was first developed in 1874 on a dairy farm near Colby, Wisconsin. The Wisconsin Central Railroad established the settlement and named the town for a financier instrumental in the business. That same guy – Gardner Colby – was a well-known philanthropist in the late nineteenth century. Among other things, Colby College in Maine bears his name.

Colby is a surname and a place name, long before it sat on refrigerator shelves.

That makes me very willing to shrug off the cheesy association. It’s broadly familiar, but it’s not as if the word only refers to the cheese.

Now, let’s head back in time to the 1980s and turn our pre-HD television to Dynasty.

The first season introduces us to the crazy rich Carringtons, with their mansions and their millions made from oil. We eventually meet one a rival family, the Colbys.

It’s a logical name for a wealthy American dynasty – obviously. Gardner had amassed his fortune ages before the show aired.

Would it strike others as problematic? Every Khaleesi will be asked if her parents were into dragons – at least for the next decade or so. But the Colby reference seems buried in another age. If the average 20-something today can’t reliably identify Joan Collins, then I’m not sure if this reference is a drawback. Of course, Dynasty is back on the air, thanks to a reboot on The CW, complete with the Colby family. But I don’t see it as the same kind of phenomenon.

So does the prime time soap opera association color Colby in 2019? I’m inclined to say it’s a non-issue.

Now, let’s turn to one other factor, the most important one: you both like this name! You agree that naming your son Colby William works. It’s a family name, with Colby honoring his mom and William your dad. That’s pretty much perfect.

Assuming there’s not another great name waiting on your family tree, that makes Colby one-of-one.

Should you sacrifice a name rich with family meaning because it might sometimes be associated with a cheese – or a cheesy 80s television drama?

I’d say no. You should use the name you love, and shrug off anyone who cracks a joke about naming your next kid Macaroni or Jack.

But I’m curious to hear what others think, too, so let’s have a poll.

Should they name their son Colby? Or is it too cheesy?