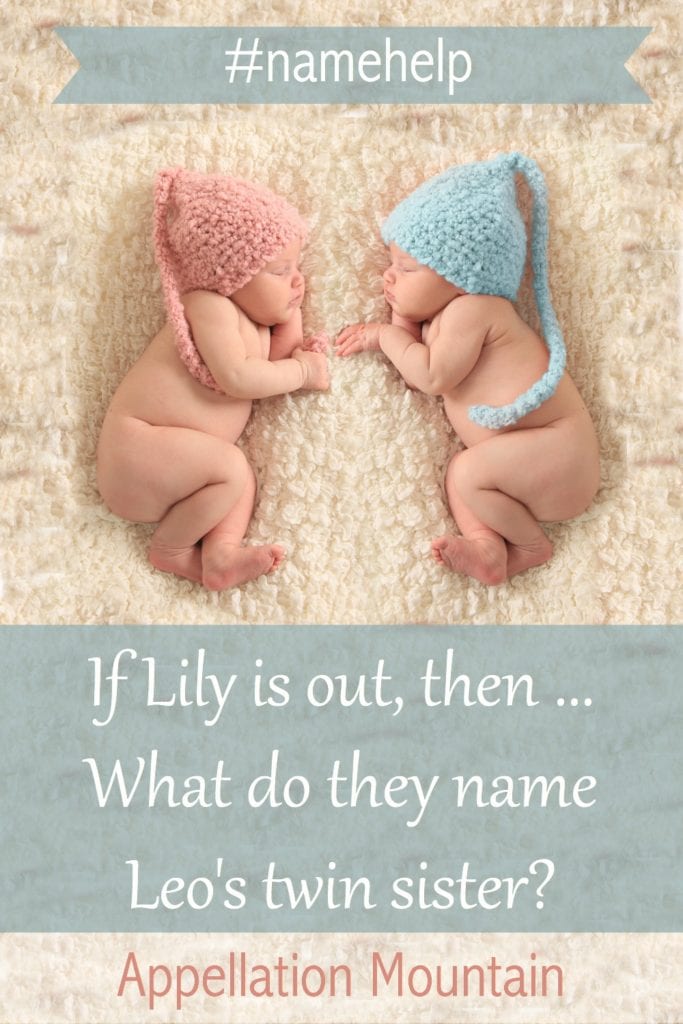 Our twins are due in a few weeks, and we have a problem and hope you can help.

Before we got pregnant, we talked about names. He liked Leo for a boy. He has a grandpa Leonard. That’s not exactly why we like the name, but it makes me like it more.

I have always, always, forever, always wanted to have a daughter named Lily. My dolls were all Lily, I made up a Halloween costume around being Princess Lily when I was little, and tried to name our family’s cat Lily.

For a few weeks, I thought our twins were both girls. We were looking for another name to go with Lily.

But we just found out that they’re girl-boy. I don’t like Leo and Lily together. They’re just too close.

We’ve decided to drop Lily. There just aren’t any boy names that we agree on besides Leo. And we do have a list of names that we like besides Lily. But we can’t choose.

The middle name will be Kathryn, for my gran. No long names because our last name is long enough already!

Please read on for my reply, and leave your own thoughtful suggestions in the comments.

Second, oh how I do dislike it that you’ve had to let your favorite name go! But I suspect it’s the right decision. After all, Leo is a pretty sweet way to honor a grandpa Leonard, and if it just happens to be the name that you both love? Then it’s a keeper.

But here’s what leaps out at me immediately.

I do think you should agree to drop Ruby and Emma, since you’re not equally enthusiastic about them. Ella does seem awfully close to Leo. Rose seems like a great substitute for Lily, but again, if he’s not on board, let’s move on.

That leaves Nora and Clara or Claire. I think all three choices would be great.

Hazel – I know it doesn’t sound much like the other names on your list, but stay with me for a minute. Hazel and Leo are both vintage names with modern sounds. Like Lily and Rose, it’s a nature name. And it’s not too long, so it will work with a more complicated last name.

Cora – I feel like Cora combines the best parts of Nora and Clara.

Gemma – It’s just slightly different than Emma, but maybe it’s different enough that it will appeal to you both?

Sophie – Sophie sounds like a nickname for Sophia, but it’s not – it’s the French form of the name. I like Sophie and Leo together quite a bit; another option might be Sylvie.

I could go on, but I’m not sure I should – after all, you have a really great list started already, and it’s a question of narrowing things down.

My favorite from your list is probably Nora. I think Nora and Leo are perfectly matched.

From my suggestions, I’m secretly cheering for Kate Lily! I love the idea that both names come from grandparents, but are updated to make them all their own.

Readers, what would you suggest to E. for her daughter’s name?