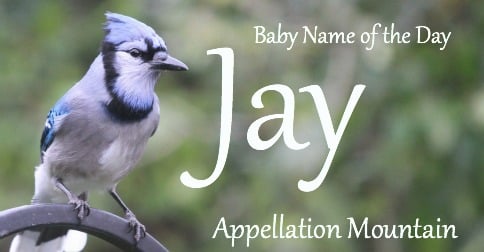 Jay is a letter, a bird, a rapper, a Founding Father.

By my count, there are six letters of the alphabet that double as given names with some frequency:

And, of course, Jay.

The name ranked in the US Top 100 for boys from 1956 through 1970, beating out Kay’s run for girls by a few years. It’s also worth noting that boys’ names starting with the sound, like James, Jason, and Jayden, have been Top Five choices in recent decades, which suggests that a great many men answer to this as a nickname, too, at least some of the time.

Bird names for girls are stylish today. This might be the most popular avian name for a boy.

As a surname, Jay almost certainly comes from the jaybird. It probably started out as a nickname for someone chatty. They’re a member of the crow family, cousins to magpies. Like the magpie, they’re known for flying off with shiny objects. 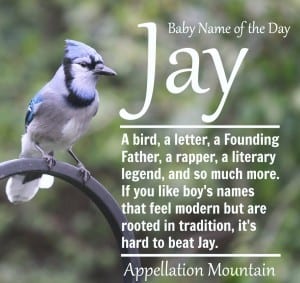 Founding father John Jay served as an ambassador, governor of New York, and the first Chief Justice of the United States.

Fast-forward to the twentieth century, and comedian-turned-talk show host Jay Leno is among the famous bearers of the name. In his case, it’s short for James.

Jay Z is among the most successful rappers of all time, with 21 Grammy Awards and counting. He was born Shawn Corey Carter, taking his stage name comes from nickname Jazzy, and his mentor, Jaz-O.

Born a poor farm boy, he reinvented himself as Jay Gatsby, the wealthy, generous host of extravagant parties. But it’s all a gambit to lure his beloved Daisy back into his life.

In the 1970s, Robert Redford played the part. In 2013, Leonardo DiCaprio starred as the Jazz Age icon.

In Sanskrit, jaya means victory. I’m not sure how common it is, but both Jay and Jai appear on lists of Indian names for boys.

You might also recall that Tonto, faithful sidekick to the Lone Ranger, was played by Jay Silverheels. Silverheels was born Harold John Smith, a member of a Canadian Mohawk tribe. His stage name came from his middle initial, plus a nickname earned while playing lacrosse.

It’s also the name of one of the Lego Ninjago: Masters of Spinjitsu animated ninjas, making it familiar to a young audience.

Jay: By the Numbers

If you like your boys’ names short and simple, but prefer something slightly more traditional than Jax, Jett, or Cash, this could be the perfect compromise name for you.

Would you consider Jay as a name for a boy?