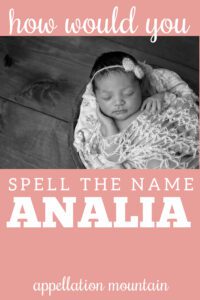 Our first baby, a girl, is due next month.

I fell in love with the name Analia after seeing it on a name site. (Not yours!) I was pronouncing it like Anna-Leah.

I’ve since learned that maybe it sounds more like Amalia with an n? And someone pointed out that the first four letters aren’t great.

So now I’m wondering: if we want to name our daughter Anna Leah, how should we spell it?

Also, middle name ideas would be great. We were thinking about Analia Rose.

Spelling can be challenging, right?

I do see Analia and say it more like Amalia. It has an accent in Spanish: Analía. In Portuguese, it’s Anália.

While it’s traditionally listed as a smoosh of Ana and Lucia, there are lots of -lia ending names that could blend together to form Analia, and I suppose the two names you start with would inevitably influence the way you’d think about pronunciation. Because when you mention the way you’re pronouncing it, well … I immediately see Ana-Lia.

The name got a big boost in the US thanks to Telemundo’s El Rostro de Analía, which aired in 2008 and 2009. The name Analia debuted in the US Top 1000 in 2009, and while it’s bounced around the rankings since then, it’s still seeing steady use.

Of course, that makes me think that I’m not alone in seeing Analía as a different name than Anna-Leah. Since it’s the full four syllable name you’re after, let’s consider the options.

I think hyphenated firsts tend to be a headache in the US.

Every state sets standards for naming. I’m not aware of any US states in which a hyphen is explicitly forbidden, but I’ve heard accounts of hyphenated names mangled by databases.

In principle, I don’t think we should ever do anything because we don’t want to upset a database. (I mean – really!) But in practice, if you don’t have a strong preference towards Anna-Leah, it’s easy for me to knock that one off the list.

That leaves Anna Leah and Annaleah. Anna Leah will probably find herself listed as Anna L. on class lists and other official forms. A small headache, easily corrected, but again – Annaleah doesn’t have those challenges.

That said, Annaleah doesn’t look quite right to my eyes – while Anna Leah is quite appealing. So let’s look at some other options.

Analia does invite some anatomical jokes. It’s easy for me to say it’s no biggie – I am not ever going to go through middle school with the name.

But it’s also true that Annalia looks different enough to me that I read “Anna Lia” more easily. So I’d give a slight edge to Annalia.

So far, this is my favorite visually.

But … this is the age of Rylea, where the “lea” is pronounced “lee.” Would Annalea be misunderstood as Annalee? I’m not sure.

Would trading the ‘a’ for another vowel make a difference?

I’m surprising myself by going back to Annaleah. I think Anna Leah might be my favorite of them all – and it’s a name Iike very much! But there are drawbacks to using a double name, chiefly the potential to go through life explaining that you’re not Anna L.

Rose is elegant, spare, and works well with Analia/Annaleah, no matter how you spell it.

I wonder if you’d also consider:

CLAIRE – I love the crisp sound of Claire with Annaleah.

HOPE – Such a great middle!

MAE – Like Rose, lots of parents use Mae. But I like the idea of Mae because it’s often associated with Mary … and Maria, your name.

QUINN – A modern surname name that balances out the romantic, elaborate sounds of Anna combined with Leah.

VALE – Unconventional and unexpected, but a great option to consider.

Overall, my favorite is probably Claire – as classic as Rose, but not quite as familiar as a middle. But all of them, including Rose, are great choices.

Readers, how would you spell Analia/Annaleah? Hyphen, double name, smoosh? And what middle name would you match with it?