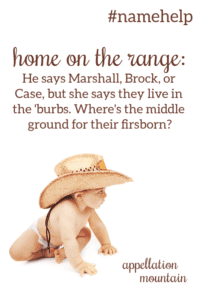 We are expecting our first child later this spring. Turns out that my husband has ideas about names, and these ideas are a little different than mine.

Before we found out gender, he suggested the following names: Jolene, Daisy, or Pearl for a girl. Brock, Case, or Marshall for a boy.

We are not now, nor have we ever been, cowboys. We don’t even have an SUV. We live in an apartment.

I’d never even heard the Dolly Parton song, the source for his favorite girl name: Jolene. (The lyrics are about a homewrecker! Not exactly a lullaby!) Still, I think we could have agreed on a girl’s name, because I kind of love Daisy, too.

Except, we’re having a boy. Every name my sweet husband suggests sounds right at home on the range.

My suggestions so far: Silas or Asher, or for something a little more modern, maybe Beckett or Hudson. He’s not on board.

We’re running out of time, and I don’t know where to start. Help!

Compromising on names can be tough – even when you generally agree on style. And this time? You aren’t on the same page.

Except … I wonder if you might have the tiniest bit of overlap?

Beckett, Hudson, and Marshall are all surnames. So maybe, like Daisy, there are a few names that will hit that sweet spot.

Ages ago, I wrote this post on Dukes of Hazzard baby names. As crazy as it sounds, lots of parents – probably many of whom are more urban than rural – have embraced a list of names that appeared on the television series back in the day. Like … Daisy!

Daisy appears with Clara, Sadie, and Ruby for girls; Simon, Jasper, and – wait for it – Hudson for boys. The post was inspired by the term “hickster” – hipster with a country edge. I’m not sure that’s completely a thing, and yet it captures the spirit of the names your husband prefers, right?

So let’s see if we can find names that hit the hickster sweet spot while still feeling at home in the ‘burbs.

Chase – This feels a little bit preppier and buttoned-up than Case, but only a little. It’s still a high-energy, action verb name.

Dalton – Dalton briefly appeared in the US Top 100 back in the 1990s, but it never quite caught on. I wonder if it would be a good compromise between current favorites like Hudson, and throwback ones like Marshall?

Emmett – There’s something homespun and humble about Emmett, but still rugged and capable.

Garrett – Pat Garrett was a sheriff in the Wild West, famed for taking down Billy the Kid. Like Dalton, it peaked in the 1990s – but never got too popular. It splits the difference between Beckett and Marshall.

Nash – Nash sounds Southern – just think of Nashville – but this name caught on following the success of 1990s drama Nash Bridges, about a California police inspector. It’s more popular today than ever before, an emerging favorite that shares sounds with Asher, but fits with Case and Brock, too.

Parker – I’ve loved Parker for ages, ever since I saw Parker Stevenson as the older brother in the Hardy Boys television series my older cousins loved. But it’s only caught on in recent years, entering the Top 100 in 2009. Since your husband’s taste seems a little bit 1970s, I wonder if Parker straddles the divide?

Sawyer – If it’s the feeling of freedom that puts names like Case on your husband’s list, would Sawyer appeal? Tom Sawyer makes this surname an Americana choice, one with a certain free-spirited quality.

Walton – It rhymes with Dalton, but Walton has a slightly different vibe. Maybe that’s because The Waltons ran forever, from a 1971 television movie debut to sequels in the 1990s and constant re-runs. I think it fits with Asher and Silas, but also with Marshall, too.

I keep coming back to Garrett and Walton. And yet sometimes names that meet in the middle feel deeply unsatisfying to both parents, and I’m not sure if that’s the case here.

Readers, what am I missing? Surely there are more names that strike a good balance between Asher and Case?