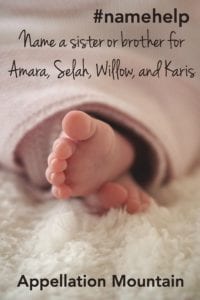 She’s here! Welcome Eliza Maeve. While Eliza might not be as offbeat as they intended, Danielle writes “we loved it too much to let it stop us.” So glad they used the gorgeous name they loved, and thanks to all for your help!

For a girl, we’re considering Eve but are not committed to it.

As for boys, we are quite stumped.

Over the years, we have loved Hudson, Judah, and Elias, but now we have several friends and acquaintances who have given their children those names and we would prefer not to use them.

Lots of people have suggested Eden, which I like, but I am looking for something that is a little more … unexpected. I hope that makes sense!

Congratulations on your fifth baby!

It sounds like your naming style was ahead of the curve when you started your family. But time moves on … and the world catches up. Ten years ago, Amara fell outside of the US Top 500. (It first made the rankings in the year 2000.) But now, it has climbed to #300 and shows no signs of slowing down. Likewise, the boy names you previously considered have gained in use – enough that you actually know kids with those names.

And, of course, many great names share sounds with your older kids’ names. Dozens of possibilities came to mind, only to have them fail my How Close is too Close? tests.

So let’s look for some still undiscovered names for both genders, starting with girls.

I share your hesitations over Eve. The name feels spare and lovely, a truly appealing choice that works well with your daughters’ names. And yet it fails the “unexpected” test. Credit the many Ev- names trending, from vintage Evelyn to trendy Everly to romantic Evangeline.

So let’s see if we can find something that works with Amara, Selah, Willow, and Karis, but takes us – at least a little bit – by surprise.

Davina – I wonder if you’d rather avoid another -a ending name? Davina serves as a feminine form of David, but it’s quite rare in the US. It brings to mind popular names like Ava, but feels distinct and different.

Elodie – I’m going to suggest a few E names, just because Eden is close, but not quite right. Elodie comes from an old name family – it’s cousin to Otto, believe it or not! Three-syllables, ends in y/ie names for girls are perennial favorites, and musical Melody has been popular for some time. But Elodie remains far less familiar.

Ember – Eden ranks #148; Ember comes in at #320. I’m not sure if that counts as unexpected, but I think it has a similar vibe while being a little more unusual.

Esme – Esme currently ranks #681. It gets a lot of buzz in baby name circles, but it remains relatively unusual in the real world. And I think it sounds like a great sister name for Amara, Selah, Willow, and Karis.

Maren – Because Eve and Eden seem more tailored, I wonder if you’d like something like Maren? Like Eden, it fits with all of those two-syllable surname names, but Maren claims roots as a form of Mary or Marina or maybe even Margaret.

Morrigan – I’ve always loved the sound of Morrigan, and the meaning – great queen, from Irish myth. Downsides: Morrigan was a war goddess. And this one could be confused with Morgan – a lot.

Vivica – With an international pedigree and a vibrant sound, I can hear Vivica fitting in with your family. Bonus: it shares the V sound of Eve.

Beau – Since Eve has a strong, short sound, I wonder if something like Beau might appeal for a boy? Ranked #187, Beau can’t be called rare – but it’s definitely not a Liam or a Noah.

Conran – Ever since British designer Terence Conran became well-known, I’ve wondered whether his Irish surname might make a great given name. It brings to mind Cameron, but is less common, as well as Conrad, without being quite to vintage.

Fox – If not Beau, possibly Fox? Short on letters, but big on sound, nothing sounds quite like Fox.

Maceo – Maceo is most likely an unusual form of Matthew, with a handful of notable bearers keeping it in sparing use. It’s jazzy and interesting, but not invented or expected.

Nico – While we’re thinking of ‘o’ ending names, how ’bout Nico? It might be short for Nicholas, or even Nicodemus. It’s unusual without being

Rafferty – There’s something vibrant and upbeat about Rafferty. While longer surnames like Sullivan are catching on, Rafferty remains rare.

Tobias – Since you liked Elias, I wonder if some other -ias ending boy names, like Tobias, might appeal?

Weaver – Names like William are too familiar, but would a surname name like Weaver appeal? It shares the ‘eve’ sound of one of your favorite girl names, and the surname style of Hudson.

Let’s turn it over to the readers: what would you suggest as a sister or brother for Amara, Selah, Willow, and Karis?