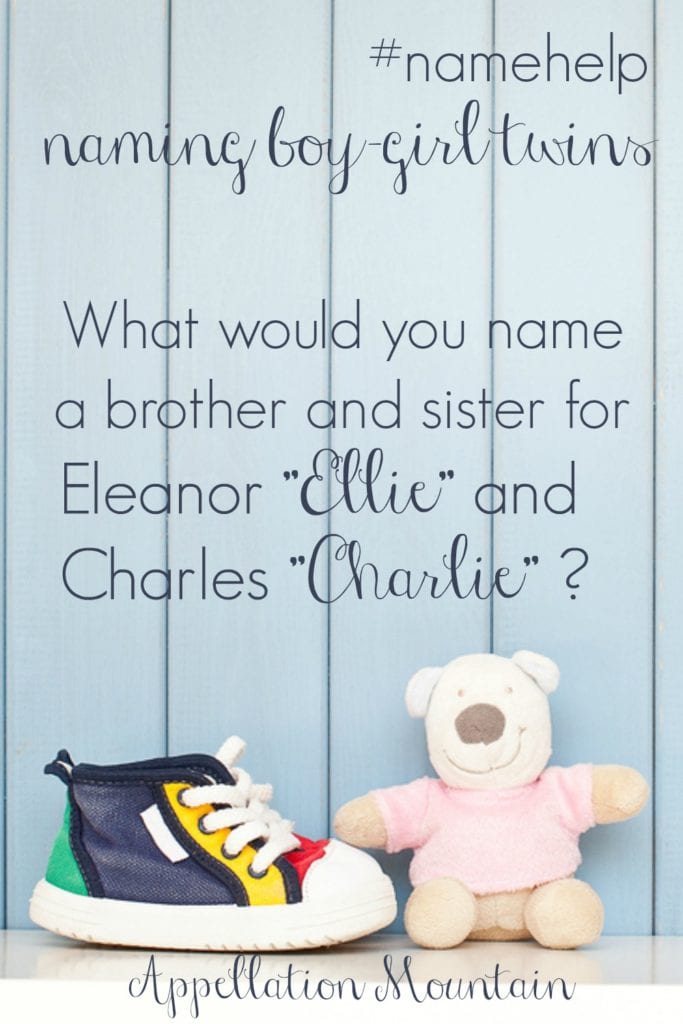 We have a 6 year old daughter, Eleanor Rae, and a nearly 4 year old son, Charles Andrew. They’re called Ellie and Charlie. We planned for just one more, but guess what? We’re having twins!

I’m due in late December, but will probably deliver earlier.

We never gave our kids’ names a lot of thought. I’d always liked Eleanor and Charles. They were the names we talked about when I was pregnant with Ellie, and when we found out our second was a boy, we knew immediately he would be Charlie.

The only other name we’ve talked about is Elizabeth, but with an Ellie already, that seems confusing. I like Alice but Ellie and Allie? If we hadn’t used Andrew for Charlie’s middle name, it would probably be our top choice, with the nickname Drew.

Our nieces and nephews are Jake, Liam, Colin, Gabrielle, Hailey, Morgan, and Brooke. Other names we can’t use include Max, James, Julian, Madeline, Sophia, Amelia, and Evelyn.

I would say we like traditional names with nicknames, but obvious nicknames, not Byron-called-Buster nicknames. Our last name starts with a W and ends with -er, is two-syllables, and is pretty common.

We just need some ideas to get started! Can you help?

Plenty of parents have a favorite name or two. After they’ve used them, it can feel like there are no names left. It’s one of the reasons naming a second – or third or fourth! – child can feel like such a challenge.

I think the key is to realize that it takes time for a name to feel like The Name. When you’re busy raising children, sometimes you fall in love with the name after you’ve chosen it – and that’s perfectly fine.

The good news is that you do seem to have a clear idea of what you want. And while the list of names that are already taken is long(ish), it still leaves lots of names that feel like good matches.

I did exclude a few traditionals without immediately obvious nicknames, like Henry. (Sure there’s Hank and Harry, too, but that’s not quite as easy as Charles-called-Charlie.)

Margaret – Margaret boasts at least a dozen nicknames, but Maggie is probably the most obvious by today’s standards. Ellie and Maggie sound like sisters. Ellie, Charlie, and Maggie. I think it works.

Josephine – Along the same lines, Josephine shortens to all sorts of creative things. Josie is the equivalent of Maggie in this case, and works for all the same reasons.

Edith – Would Edith called Edie be a possibility? I’m not sure if Ellie and Edie feel too close to you. Some families try to avoid repeating a first initial; others don’t mind. I think Ellie and Edie are sweet together, and not too similar.

Katherine – The more ideas I came up with, the more I realized I was using all ends-in-ie names. Is that a problem? Katherine might be Katie, but it could also shorten to just Kate.

Louisa – On my search for girls’ names that easily shortened to a non-id-ending nickname, I thought about Louisa. Louisa becomes Lou or even Lulu. I really like the sound of Ellie, Charlie, and Lou.

Theodore – It was so much easier to find non-ie-ending boy names! Theodore could be Teddy, but I think Theo is the go-to nickname.

William – Do you mind the idea of alliteration between your first and last names? I think William W—er works nicely, as does Will W—er, but it’s a personal choice.

Alexander – Or maybe Alex? The strength of Alex is that it feels very traditional, but that ‘x’ makes it distinctive. And, as the mom of an Alexander-called-Alex, I promise you that it is the go-to nickname.

Nathaniel – Likewise, Nathaniel tends to shorten to Nate. You probably wouldn’t want to choose Katherine and Nathaniel – Kate and Nate! – but Nate pairs well with lots of other names on this list, including Ellie and Charlie.

Joseph – Joseph is so traditional that I think we tend to overlook it, unless we’re actually naming our sons after grandpa Joe. But it’s a great name, a classic worn by many accomplished men. Ellie, Charlie, and Joe are great together, and Joe pairs nicely with all of the girls’ options, except, of course, Josephine.

I’m having a tough time picking my favorites for you, but I think I’ll go with Margaret and Theodore. Ellie, Charlie, Maggie, and Theo. Each child has a separate first initial, which can be helpful for labeling things. And the names share the same style without feeling similar in any way.

Readers, I know you’ll have some great suggestions for MJ and her family. What would you name a brother and sister for Eleanor “Ellie” and Charles “Charlie”?