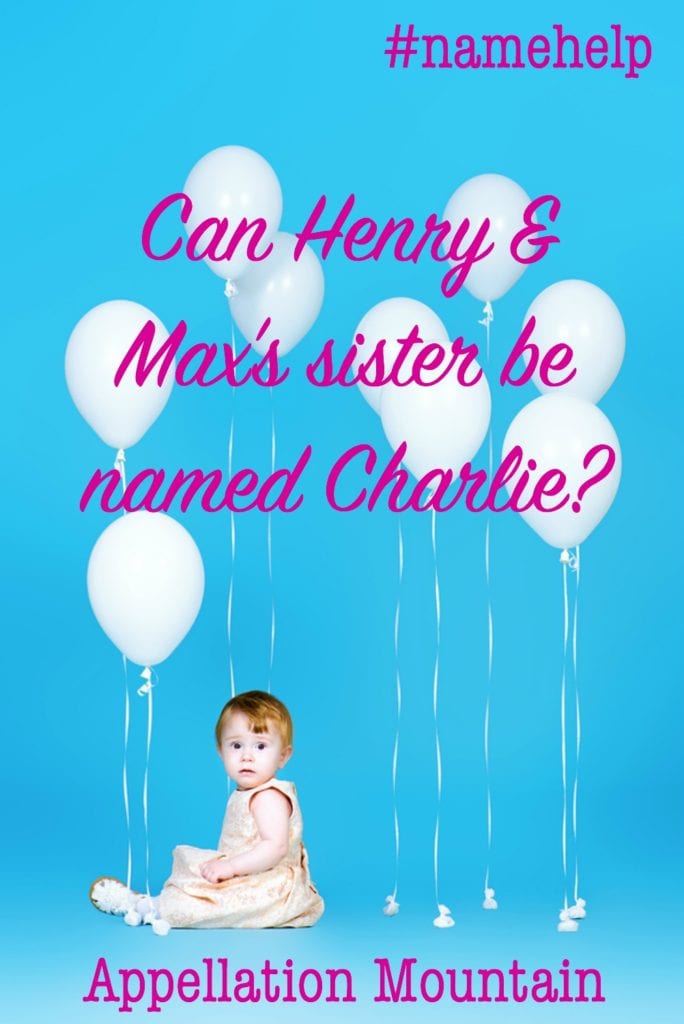 Name Help is a series at Appellation Mountain. We’re relying on thoughtful comments from the community to help expectant parents narrow down their name decisions. Thank you in advance for sharing your insight!

We are expecting our third, and probably last, child, in a few weeks. We have two sons: 7 y.o. Henry Brian and 3 y.o. Maxwell Luke. This baby is a girl, and my favorite girl name is the same as since we first had Henry: Charlotte.

But all of those names lead to the same problem – all sound like little brothers for Henry and Max. Not sure why this bothers me – a girl Charlie or Alex or Frankie would always be mistaken for a boy some of the time, no matter what.

But I can’t stop thinking about it, so maybe I should just move on? But move on to what?

You’ve raised so many fascinating points. Let me run through just a few before we get to your question:

It strikes me that Henry, Maxwell, and Charlotte are almost perfectly matched. They’re traditional names that feel especially current today. So do the nicknames you prefer – Max and Charlie. It also helps that there are a great many girl Charlies today – many named just Charlie, some as nicknames.

You could very easily shrug off any objections you encounter. But I wonder if this is only partly about Charlie feeling boyish. It may also be that after eight years of pondering baby names, the shine has worn off Charlotte. Or maybe it just feels too easy – like you ought to think about it a little more before deciding?

Let’s take a look at some other possible names, and see if any of them feel like a better fit. If the answer is no, then I think you can move forward and use Charlotte called Charlie.

Lottie – I wonder if you like the idea of Charlotte called Lottie? It’s definitely not the most familiar nickname today, but it has plenty of history. Lottie sidesteps the gender question, while still letting you use your favorite name.

Georgia, called Georgie – Names like Alex and Charlie feel boyish. Georgie shares the same style, but I expect Georgie to be a girl. (At least in the US.) And Georgia strikes me as a name that might fit very well with Henry and Max.

Juliet, called Jules – Or Julia, Julianne, or Juliana called Jules. The thinking is the same as above.

Louisa, called Lou – A third in the mostly-feminine, but slightly-masculine camp. Of course, Louisa also offers Lulu and Lucy, so there’s plenty of reason to love this traditional name.

Violet – No nickname required for Violet, though I’ve heard Violets called Vee. It’s as tailored as Charlotte, and nearly as popular.

Amelia, called Millie – It’s clear you really like names like Alex and Sam and Charlie for girls, but I wonder if you’d like a nickname that’s most conventionally feminine, but still short and sassy.

Any of the Ev- names, called Evie or Eve – There are dozens of Ev- names for girls, from mega-popular Evelyn to obscure Evanthe. It might just work.

Katherine, Katharine, called Kate – There’s something crisp about Kate. Is it conventional? Sure. But it’s an enduring name with a no-nonsense appeal. Catherine/Cate also presents an option.

But would it topple Charlotte from the name’s long-time #1 perch? Please tell us! And I’d love to hear from parents who have struggled with this type of question.