We’re expecting our third child any day now, and I thought I had the name picked out. But three separate (and totally unrelated) people have asked if that name is “short” for anything, and now I’m having doubts.

We have two children. Our son is James Engler LastName IV. We call him Jack, because Jim and James are already taken, and I have a sister-in-law called Jamie, and a nephew Jameson.

Our daughter is Elizabeth Avery. Elizabeth is my middle name, my grandmother’s name, and his mom’s name. Avery I just liked. (She was almost Avery Elizabeth, but we know two other Averys!) We call her Ellie.

We were all set to name our daughter Lucy Marie. Marie after his grandmother, and Lucy because I just plain love it.

But now three totally separate people have asked me if Lucy is short for anything. I didn’t think it had to be, but when I mentioned it to my husband, he said that he liked Lucille. I don’t hate Lucille, but I don’t love it the way I love Lucy.

Do I need a longer name for Lucy?

This is such an interesting dilemma!

First: there is absolutely no need to have a longer name for Lucy. Lucy is the most popular of the Luc- names for girls, at #62 in 2014. It’s traditionally given as an independent name, just like Mary. The ‘y’ ending doesn’t mean it is – or ever was! – short for something.

But even if Lucy was traditionally a nickname, there’s no reason to expect that would still be true today. Sadie was once short for Sarah. Many a Molly was actually a Mary, not so long ago. But today? Sadie is Sadie, Molly is Molly, and Kate, Jack, Tom, Maggie, and Charlie may not have formal names, either. There are plenty of good reasons to put the every day use name on the birth certificate.

That said, I think people are asking because they know that your Jack is really James IV, and your Ellie is actually an Elizabeth. Assuming they also know that those are both family names, they may be wondering if Lucy is actually named after your great aunt Lucia. (Or insert similar explanation here.)

I’m also guessing that if this was your first child, no one would think to ask.

So you’ve set a pattern that others are picking up on, but does that mean you have to continue the pattern? 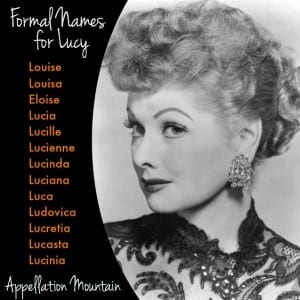 I’m pretty sure you can guess my answer: of course not! There are good reasons to have a formal name, but if the name you love doesn’t require – or lend itself to one – there are equally compelling reasons to go nickname-free.

But what it you just plain want a formal name for Lucy, other than Lucille? You could consider:

It’s impossible to know what Lucy would prefer. Maybe she’d love to be a Lucia, or maybe she’ll dislike correcting people, “Please call me Lucy,” for the rest of her life.

I’m inclined to tell you to stick with the name you love, especially if you’re not certain about which name you’d choose instead.

But I’m curious to hear from readers: is it important for Lucy to have a formal name/nickname, just like her siblings?

If you do think a formal name is a good idea, which one would you suggest?

Lucille is, I think, far and away the most obvious choice. Partially because of the great Lucille Ball, we all think of Lucille-called-Lucy as natural.

Assuming there are no family connections to any of the possibilities, I quite like the idea of Louisa called Lucy. James, Elizabeth, and Louisa. Jack, Ellie, and Lucy. It’s a sweet trio, and the formal names/nicknames do form a pleasing pattern.

If – and only if – that’s something you want to continue.

Readers, please vote in the poll! Would you give Lucy a formal name just to match her siblings’ names?