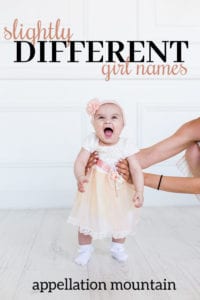 My husband and I are expecting our first daughter in May, and we can’t agree on a name.

I grew up one of many Meagan/Megan/Meghans. There was almost always another girl with the same name in my class. (In high school, my softball team had four, with three different spellings.)

It’s very important to me that there be only one way to spell my child’s name.

In a perfect world, I’d like her name to be a little bit different, without sounding like a Kardashian. But my husband – who has never minded being one of many Andrews – shoots down anything that he hasn’t heard before.

It would be great if there were nickname choices, too. I went through a call-me-Maggie phase, but no one thought it was a “real” nickname for Meagan and it didn’t really stick. But if I find a great name without a nickname, that’s fine.

Her last name will be Burrow-with-an-M, and we’d like either Jane or Joan, both family names, as the middle name. Because of this, I think the first name has to be three syllables or longer. It also rules out most M or J names.

Andrew’s only suggestion so far is Amanda, which was the name of the chief mean girl in my high school, so … no.

Congratulations on your new daughter. For some reason, dads – maybe some moms, too, but this feels like a dad thing – sometimes get stuck like this. “Real” names belong to the kids who shared the same craft table in kindergarten. And “wacky” names are anything from the current US Top 100.

The trouble is, of course, that Jessica and Stephanie are now mom names. Choose those names for your children in 2020, and they’re the odd ones out.

So your husband’s inclinations to choose names he knows? Could totally backfire.

I’m hoping that what he means is something timeless. Because if that’s the case, I think there might be plenty of common ground between your list and his idea of a good name.

A queen and an Australian city, Adelaide fits in with all of the Addie names, but stands out by virtue of the distinctive -laide ending sound. Your daughter might be one among several Addies, but Adelaide tends to be uncommon. #298 in the US.

A lovely name with a tailored sound that still feels thoroughly feminine and romantic, Celeste has a handful of pop culture associations. But it feels more timeless than trending. Odds are your husband has heard of it – but your daughter wouldn’t have to share it. #441 in the US.

The names you love tend to be long and flowing, so I’m wondering if something shorter might appeal to your husband? Mythological Daphne has a spirited, upbeat sound. It fits right in with Penelope, but feels just a little different. #383 in the US.

It’s possible you’re hyper-aware of names that are in vogue right now – especially if you’ve been reading up on name options – while your husband is blissfully unaware. This is the one of the more popular names I’ve suggested for you, and yet, it’s not exactly Emma. Plus, I can’t imagine your husband hasn’t heard of Genevieve … #172 in the US.

Okay, Josephine ranks in the US Top 100. But nothing really sounds like Josephine. It comes up with so many great nicknames I can’t ever think of them all. And it’s a good balance between classic names of the past, and stylish choices for 2020 children. #91 in the US.

Gossip Girl debuted in 2007, featuring Blake Lively as the wealthy, privileged Serena van der Woodsen. But the name has history to spare. Edmund Spenser used it for The Faerie Queen way back in 1590. I feel like it’s almost your style, but could satisfy your husband’s concerns. #392 in the US.

Back in 1940 or so, Tabitha would’ve been a weird name. But then came a handful of pop culture uses – especially supernatural sitcom Bewitched in the 1960s – and this name went mainstream. You might even know – or know of – a Tabitha if you really give it some thought. But it doesn’t feel stuck in a particular decade, and it’s not really being given to girls today. Outside of the current US Top 1000.

There’s a quirky, bouncy sound to Veronica. Elvis Costello has a quirky little song about a grandmotherly Veronica, but it’s not exactly a vintage name. And there’s the Veronica from the Archie comics, but it doesn’t feel mid-century. Technically, it peaked in the 1970s. And Riverdale could bring it back today. But I think it’s the perfect timeless, but not exactly classic, kind of name. #357 in the US.

Readers, what would you suggest to Meagan?