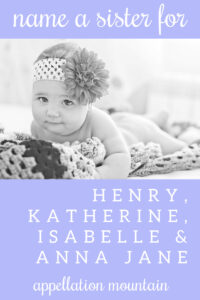 We are expecting our fifth in September! I’d tell you it was our last kiddo, but I’ve said that before and been wrong.

Nicknames are big in our family, and while they do sort of change over time, we can’t really imagine choosing a name that doesn’t have some options for shortening it.

Repeating initials is a big NO for me. I’m sure we could make it work, but I like labeling things with just an H, K, I, or A!

Names we’ve considered but can’t/won’t use:

Names that our sort of on our maybe list:

We’ve looked at so many traditional names, I think maybe we just need a different perspective. Thank you in advance!

Please read on for my response and leave your thoughtful suggestions in the comments!

I’ve said it before: naming is that weird thing that gets harder as we become more experienced parents.

We don’t want to match too much. But we want the name to sound like it belongs in our family. And, of course, many of our favorites are already in use – or ruled out by another name.

So it’s a puzzle.

Whenever I talk to families with very traditional names, it feels even harder. After all, the list of traditional names is, by definition, limited. It seems unlikely that I’ll think of That One Name you’ve never thought about before.

And yet, you’ve made a good point. Sometimes we overlook a great choice for no obvious reason … until someone else brings it up.

So let’s get started!

I think Louise/Louisa is the name to beat.

Yes, your husband is lukewarm. But it’s an impeccable classic, and a new initial, and there’s so much nickname potential. I’m sure you’d call her Lulu – at least some of the time, right?

I’m much less certain about Mary. It’s amazing with your older kids’ names. I can come up with fun nicknames and combinations for days. But it does feel like it’s already part of your older daughter’s name.

And while I agree – cousins sharing names has always appealed to me – I’m not sure it would really overcome any of the logistical complexities. I mean, obviously if you were talking about college graduations, well, that would be for the older Mary. But I can think of lots of times when you might find yourself clarifying which Mary you mean, which I’m assuming is part of why you haven’t used it previously, right?

Let’s see if we can come up with some new possibilities.

Like Charlotte, this is also a feminine form of Charles. But it’s different enough that cousins could easily answer to Charlotte and Caroline without any confusion.

A logical substitute for Elizabeth, every bit as classic, but maybe with short forms that will appeal? Nell is my personal favorite.

Frances is sophisticated and lady-like. Nickname Franny is sparky and retro. And Frankie just explodes with upbeat energy.

Longer names do tend to have more short forms, and Josephine is no exception.

If Mary is out – and I think it probably is – could Marian be in? Marianne/Marianna comes a little too close to Anna Jane’s name, but Marian might not. I’d call her Mimi for short, but Mia and Mari and Mae and Mare are all options, too.

Theodore is a white hot classic for our sons. No surprise that Theodora is slowly catching on, too. I think you might even use Tess as a nickname.

I’d call Veronica a quirky classic. It’s plenty of traditional, but the sound is distinctive and just plain fun to say.

If your husband can’t be talked into, say, Louisa Claire, then I wonder if something like Josephine Ruth would appeal?

Readers, over to you! What are your favorite classic girl names with fun nicknames, to go with Henry, Katherine, Isabelle, and Anna Jane?