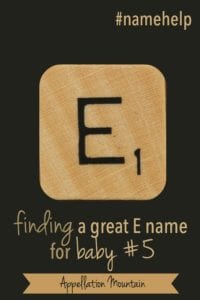 I shared how we named our son with you a couple of years ago. We already had a girl Ellery and a boy Everett and we felt our third shouldn’t be left out of the E names (because most likely he was our last) We ended up “making up” a name, Elynn, that had meaning to us and it’s perfect for him!

Since then we’ve added another girl, Edith, and wouldn’t you know we have one more on the way!

Boy names we’re drawn too: Ezra, Ender, Ezekiel, Elias (can you have too many El- names in one family?)

Girl names: Esme, Ester, Eve, Emerson (I love Emerson, but husband won’t get on board), I also love Eila but he says it doesn’t sound like an E name so it’s out.

I’d love to hear your opinion on both boy and girl names, but do have a few things I’d like to avoid:

I’ve been a long time reader and appreciate the advice you give! I think I’ve read every E name post on your blog and always love your #namehelp posts.

It sounds like you’re on the right track. Finding a fifth E name means looking closely at the starting syllable of each child’s name, as well as the overall sound. But if we rule out El-, Ev-, and Ed- names, that means that you’re cutting out Elias and likely Eve, too, as well as Elaine.

Emerson would be a great pick! A different first syllable and a different ending sound? Perfect! Too bad your husband isn’t sold. And I take his point about Eila. While ordinarily I’d say that Eila offers multiple spellings and you should just choose your favorite, I can see that it might feel a little removed from the theme.

Happily, E names abound. With Ellery, Everett, Elynn, and Edith, how about:

Emeline, Emmeline, Emmaline – Emmalyn comes too close to Elynn, but Emeline – pick your spelling – pronounced with a long ‘i’ sound – feels distinctive. It’s worth considering whether you tend to default to the ‘lynn’ pronunciation? My sense is that -line signals a rhymes-with-pine sound to many people. Emeline sounds like a sister for Edith, but picks up on the sound of your favorite, Emerson. Of course, it also strikes me that Emma – while a #1 name in the US – might seem different in your family!

Erica, Erika – Erica peaked in the 1980s, meaning that most Ericas these days are moms, not kids. And yet, it’s a different sound. With the exception of Eila, you haven’t considered any -a ending names for girls. While some -a ending girls’ names can feel elaborate and frilly, Erica does not. (Possibly because it carries all of the Norse strength of Eric.) And I do really like it with Ellery, Everett, Elynn, and Edith.

Estella – I like Ester quite a bit, but I wonder if you’d consider Estella? It gives you an -el sound, but at the end, not the beginning!

Evangeline – Is Evangeline too much for you? It shares Everett’s Ev-, but feels different, too. If it’s not The Name, but you like the sound, it might also be worth considering Evalina or Everild. Everild is really rare, but has history and an intriguing sound.

Etta – I mentioned Emma earlier, but I’m guessing that might be too mainstream for your tastes. But how ’bout Etta? Singer Etta James – born Jamesetta Hawkins – makes the name broadly familiar, but it’s very seldom heard as a given name in the US today. Back in the nineteenth century, it ranked in the US Top 100, but today it feels like a vintage, under-the-radar option.

Moving on to boys:

Eben – Eben sounds like Evan, but with a ‘b’ sound instead of a ‘v’. It’s short for the Old Testament Ebenezer, and yet it sounds nicely modern.

Egan – Egan has a strong E sound, but Eg- stands out in your family. It comes from an Irish surname – it’s cousin to Hagan – and that’s been a popular source of names over the years. Egan sounds bright and upbeat.

Emmerich – I thought about Emery/Emory for boys and girls, but maybe it seems too close to Ellery? And then I remembered Emmerich – the source for Emery! It’s an old Germanic name, rarely heard to day, but very much consistent with popular styles. There are several possible meanings and spellings, but any of them look and sound very different from your older kids’ names. One other thought: Eric works well for a boy, so if Emmerich seems like too much name, Eric might appeal.

Espen – Yes, some parents have named their sons Espn, for the sports network. But this isn’t that! Espen is a form of an Old Norse name, also related to Osborn. Esben is yet another spelling. I think they both work well with your older children’s names.

Evander – Evander sounds nothing like your older kids’ names. Sure, there’s the Ev- of Everett. And the -er ending echoes your name’s ending. But in total, Evander sounds nicely different. It gives you a little bit of Ender’s sound, but in a longer form.

Now, what do I think works best? I love two of the names from your original shortlist: Esme and Ezra.

Why? They hit the marks that seem to matter most. Neither shares a first syllable sound with your older kids’ names. They clearly sound like E names. And even their endings are distinct and different.

From my list, I’m most drawn to Egan and Etta or Estella – something -a ending! I especially like Egan. If you’re looking for names that truly stand out, Ezra is a mixed bag. On the one hand, it hasn’t been wildly popular over the years – even though everyone recognizes it as a name. But Ezra entered the US Top 100 two years ago, which makes it more popular for boys born today than you might expect.

Overall, I think there are plenty of options remaining within the letter E. It’s proof that it’s possible for siblings to share the same initial, and still have names that seem uniquely their own!

Readers, what E names would you suggest to Amber and her family?