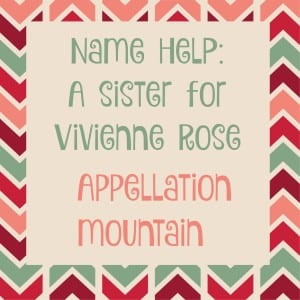 We are searching for a name for our second daughter. We had a short list for her sister, Vivienne Rose, and ultimately made our choice because it is a family name, and we loved Vivi.

We are struggling to come up with a short list this time! All the options we had instead of Vivienne just don’t seem as fresh, and right now, my husband and I do not agree on any.

We are open to any and all suggestions!

Please read on for my thoughts, and please leave your ideas in the comments!

Congratulations on your new daughter! It’s funny – sometimes a family’s original shortlist is still going strong four kids later. For other families, it’s almost as if the unused names belong to that first child, every bit as much as the name they finally chose. As with so many things in parents, there’s no right answer.

Here’s what I think you’re looking for:

Genevieve – This name only works if you’re determined to shorten Genevieve to Gen or Genna or Gigi instead of Evie or Vivi. Otherwise, the two names are just too close. But overall, Vivienne and Genevieve are really quite lovely – French, feminine, vintage in style, but on trend for 2016. At #210 in 2014, Genevieve is slightly more popular than #249 Vivienne – but unlike Vivienne and Vivian, there are no alternative spellings to make the name seem even more popular.

Josephine – I feel like this one must have come up in your conversation! It’s just as sweetly French as Vivienne, with nicknames galore. Vivi and Jo, Vivi and Josie, Vivi and Posy … the list goes on. Plus, Josephine and Vivienne are close, but definitely not too close. At #147, Josephine is more popular than Vivienne, but still not too common.

Delphine – Let’s stick with the French theme, but look for something less familiar. Delphine does not appear in the current US Top 1000, which makes it fairly obscure. And yet, it’s a simple, straightforward name, easy to say in English. It shortens to Della or Fina, and it pairs beautifully with Vivienne.

Elisabeth – Elizabeth is such a timeless classic, and yet it’s a little too buttoned-up for many parents’ tastes. I think Elisabeth – just one letter different – can be a gorgeous alternative. It feels slightly French, just like Vivienne. As with Josephine, there’s no shortage of great nickname options. Vivienne and Elisabeth, Vivi and Betsy. Or Vivi and Liza. (Though perhaps Liza is more logical with the Elizabeth spelling?) Elisabeth ranked a relatively rare #603 in 2014.

Helena – Some parents pause when considering Helena. It’s lovely and has deep roots and a great meaning. It’s used throughout Europe. But it also has multiple pronunciations – at least three distinctly different choices. While that can cause confusion, I think Helena’s strengths make up for it. Nicknames Nell and Lena are lovely, and it feels like an underused classic. It ranked just #502 in 2014. Another bonus? If you’re hoping to have more children, you won’t feel like you’ve established a French theme in the way you might if you choose Delphine.

Juliet – Another romantic name with a tailored vibe, though the frillier Juliette spelling is actually more popular in the US. (The -ette spelling was #255 and gaining, versus the -et spelling, which was #257 and falling.) Either spelling seems like a great possibility for Vivienne’s sister.

Eloise – Eloise has French roots, but somehow feels like less of an import than Genevieve. Maybe it’s because of the name’s fun and unexpected sound, or maybe that’s because I’m forever thinking of the storybook character. Nicknames abound, from Ellie to Lola or Lolo.

Louisa – Eloise reminds me of Louise and Louisa. They’re familiar, steady names for girls – and yet a surprisingly small number of parents choose them for their daughters. As of 2014, Louisa ranked #971 – behind Frida, Mercy, and Neriah. Louise didn’t even crack the Top 1000.

Cecily – I like the idea of a different ending for your second daughter’s name, and Cecily immediately came to mind. It’s the medieval English form of Cecilia. And while Cecilia seems maybe a smidge too frilly, I kind of love Cecily as a sister name for Vivienne. It doesn’t rank in the current US Top 1000 – shocking, right!? – but it seems like a familiar, wearable choice.

Amelie – Cecily brings us to Amelie, which takes us right back where we started – French names! I think it’s a lovely, unexpected update to popular mainstays Emily and Amelia, and I’m hearing it more and more. The name ranked just #667 in 2014.

Overall, my favorites are Josephine, Helena, and Cecily. It’s hard to choose!

Now, a word on middles. I’m not sure if Rose has family ties? For a similar feel, there’s  Grace, Ruth, Mae, or Hope. If you’re willing to consider something more daring, but also short, you might try Sloane, Hart, Blythe, Lux, Pax, Snow, Bright, or Blue. Since you’re expecting a winter baby, I’m particularly drawn to Lux and Bright – names that have to do with light.

Overall, I’m especially drawn to Josephine Blythe, Helena Snow, and Cecily Ruth. But there’s no shortage of possible combinations, and I know that the readers will have some great pairings and possibilities to add to the list.

Readers, can you add some names to Carolyn’s shortlist? Do any of the suggestions leap out at you as The Name for Vivienne Rose’s sister?