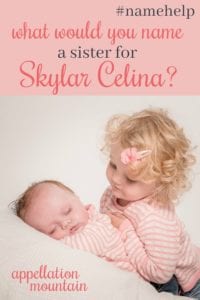 I’m an avid Pinterest follower and just found you on Facebook. We are going to be surprised with the gender of our second child when he or she arrives in a month. We have a set of boy names we love but can’t pin down any girl names we adore. Baby’s big sister is Skylar Celina.

Any help is appreciated!

Skylar Celina perfectly balances the modern and the traditional. It’s unisex and feminine, popular and unexpected.

But it raises the question of what you’re looking for next time around.

Often find that names I perceive as unisex are seen differently by parents. I hear Skylar and think Harper and Emerson and Kennedy. But maybe you’re hearing it as strictly feminine.

Another thing that strikes me about Skylar Celina – it’s a name meant to go up! Skylar brings to mind the sky, obviously; but so does Celina. Sound-wise, it reminds me of Selene, the moon. But it’s also an elaboration of Celia, from the Latin – heavenly.

So is it that meaning – subliminal though some of it is – that makes the name so appealing? If that’s the case, then a positive vibe, maybe with a virtue or achievement-oriented meaning, could be another key to finding a great name.

Lastly, I wonder if you’re after a less common name, or a more mainstream choice? Skylar ranks in the current girls’ Top 100 … but it feels fresh and new, since it wasn’t popular until very recently.

Stella Avery – Maybe this is too obvious, since they’re both Top 100 names, and the means of Stella and Skylar (star + sky) are so closely linked? Still, I like Skylar Celina and Stella Avery quite a bit.

Ruby Elowen – Like Celina, Elowen is gorgeous and unexpected. It’s from a Cornish name meaning elm tree. Ruby, obviously, is a noun name with a bold sound – I think it stands up nicely to Skylar.

Tristan Elodie – Tristan is used for boys, overwhelmingly and almost exclusively. (Over 3200 boys in 2017 versus about 50 girls.) In fact, I’m tempted to add it to your boy’s list, too. But Tristan also strikes me as an update to former favorite Kristen, so I think it works – especially if part of Skylar’s appeal is the unisex vibe.

Rowan Felicity – This might be the most closely matched to Skylar Celina – a unisex first with a romantic, even frilly, middle. I really like Rowan as a sister for Skylar, and Felicity carries a great meaning – happiness.

Juniper Esme – Or maybe you’d rather choose another name that feels unisex, but is much more common for girls? I like Skylar and Juniper together, and Esme is an unexpected middle, plus it means beloved.

Brighton Elise – What would you think of something like Brighton? Like Skylar, there’s a great meaning waiting right underneath the surface – light and bright. Elise makes for a lovely, traditional middle to balance the bolder first, just like Celina does for Skylar.

Looking at all of these options, I’m not sure what direction makes more sense. After all, Skylar is modern but familiar; names like Brighton and Tristan are modern but unconventional. I’m most drawn to something like Rowan Felicity or Brighton Elise.

But I think the community will have some amazing suggestions for this one, so let’s hear them!

What would you name a sister for Skylar Celina?