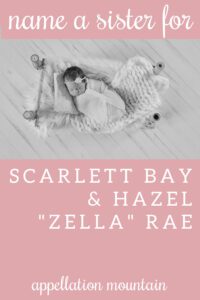 We are looking for some help with naming our third girl, due in May, so getting close! Our first two are Scarlett Bay and Hazel ”Zella” Rae.

My husband and I have VERY different naming styles. He wants a name that will not raise eyebrows or inspire comments, while I like quirky and fun. For Scarlett Bay, we gave her the quirky middle and a Top 50 first name. For Hazel “Zella” Rae, we gave her a Top 50 first with a quirky nickname – a method I think I prefer.

My husband is learning toward sticking with the color theme, but neither of us are overly tied to that.

A few  names we both sort of like, but don’t love:

Others we have talked about, but one or the other rejected: Matilda (Tillie), Violet (Lettie), Willow, Ada, Daisy.

A few names we like for middle names, but not first: Sage, Clover, True.

Any help or suggestions would be appreciated!

You’ve navigated the divide between your styles and preferences with grace. But it does get harder with every new arrival, doesn’t it?

What leaps out at me: if your style is Top 50 with a quirky nickname, there’s only one choice on your list. Aurora ranks #36 and has built-in nickname Rory. Scarlett, Zella, and Rory – perfection, particularly because Rory feels like it falls somewhere midway between familiar Scarlett and very rare Zella.

Irene-called-Ren and Opal-called-Polly are great choices. But they’re pretty far outside of your usual range. Irene ranks #624 and Opal #659 as of 2020. That doesn’t mean you can’t use them – in fact, I think they’re great with Scarlett and Zella.

But I’m guessing that their relative obscurity is part of the reason they don’t feel like The Name?

Let’s come up with some fresh options.

A SISTER FOR SCARLETT and ZELLA

Let’s start with names ranked in the current US Top 250 that offer cool, quirky nicknames. The lists goes and on, of course. But I’m skipping the most traditional of first names. While I think Elizabeth called Birdie might work, I’m not sure if that’s quite your style, based on Scarlett and Hazel.

Both Eloise and Lola rank in the current US Top 250, but Lola still feels like a bold, unconventional nickname choice. For more formal name options for Lola, see this list.

While Genevieve has never been wildly popular, I think it fits in nicely with Scarlett and Hazel. Gigi could be a sparky choice of a nickname.

Penelope is a Top 50 pick, an obvious addition to your list. It could shorten to Polly, just like Opal. Of course, it might also shorten to Poppy … which gives you another color name to go with Scarlett and Hazel.

While you could pair the names above with a colorful middle – I’m a big fan of Penelope Sage – maybe there’s a more obvious color name to consider as a first?

The feminine form of Clement, Clementine isn’t a color at all. It means peaceful. Except clementines are a small citrus fruit, making this a name inspired by the color orange.

Neil Gaiman reversed two letters and his fictional heroine Caroline became Coraline. But Coraline also brings to mind the color coral, which makes it a fit.

It’s not exactly a green name, but Juniper brings to mind the tree. And it’s associated with a pretty shade of green with blue undertones, too.

A blue-purple color, and a bold choice for a child’s name.

It seems surprising that Marigold is so rare. It’s a flower name like Rose and Violet, and Downton Abbey has used it for a character’s name, too.

I know this is a stretch! But the green gemstone could make a completely unexpected name and nickname Dot is an obvious choice. It’s worth noting that Peridot is often pronounced like Margot, but I still think Dot is an option.

Sienna fits in the first list, actually – it ranks #166 and it’s a color name, a reddish-brown inspired by the earth of Siena, Italy. But I’ve kept it here because both Sienna and possible quirky nickname Sunny are such strong color names.

Maybe Winter isn’t a color, exactly, but it seems color-adjacent. Nickname Winnie is vintage, while Winry leans modern. Both work nicely with Scarlett and Zella.

Overall, I’m most drawn to Penelope Sage called Polly or Poppy. It really does check every box!

Readers, what would you name a sister for Scarlett Bay and Hazel “Zella” Rae?