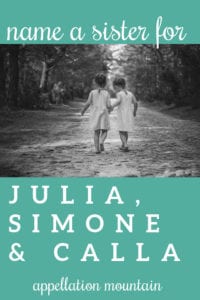 I keep waiting for the “yes, that’s it!” moment, but it hasn’t happened yet.

We have three daughters: Julia, Simone, and Calla.

Here are the names we’ve considered:

MARLOWE – I love! Partially because it is a surname and I dropped my surname (which started with an M) when I got married.

ANGELIE – A long-time favorite. I like both Annie and Gigi as nicknames.

SOLENNE – Love the sound! It’s similar to Belén, which we’ve considered for a middle name. (Given the spelling/pronunciation issues, we don’t want to consider Belén as a first name.)

We’d love some help narrowing it down!

I don’t think you can go wrong with any of your choices.

But they are all very different, right? I can see why it’s tough to narrow them down.

Let’s look at them in the order you’ve listed them.

I think you’re probably a decade ahead of the curve here. I’m hearing more parents consider Irene. Maxine is back. Josephine is the new Charlotte. While Darlene and probably Maureen have another thirty years left to hibernate, I can imagine Francine roaring back.

But I can also imagine Francine being shortened. If you loved, say, Francie or Cici or some other reasonable Francine nickname, it might work just fine. And plenty of parents successfully insist that their child is Sebastian, not Seb; Isabella, not Belle. But … eventually your Francine will have opinions of her own, and if she loves being Franny or Frankie? Then yes, it’s an issue.

At first glance, it’s a mismatch. Julia, Simone, and Calla are feminine. They’re clearly given names. And while you’ve found less and less common names for each daughter, they still sound like they go together – and could’ve gone together a century ago, or fifty years from now.

And yet, the longer I say the names together, I think they really do work. Julia, Simone, Calla, and Marlowe. It’s tempting to suggest Margot or Marlo instead – but it sounds like Marlowe’s surname style is part of the attraction.

Angelie is new to me. It seems French, except it’s also used in Scandinavia – and really, in very small numbers everywhere. Just 65 girls were named Angelie in the US last year. All that said, it’s a great name – and I think it pairs well with Julia, Simone, and Calla. In fact, like Simone and Calla, it feels just a little different, in a good way.

But maybe the biggest bonus here? There are two great nicknames, and you love them both.

Solenne is a lovely, sophisticated name. Belen takes a minute to pronounce correctly – putting the emphasis on the second syllable doesn’t quite flow in American English. But Solenne, somehow, seems to flow better. But it does seem a little close to Simone. And while it’s a good alternative to Belen, maybe it’s actually just an unsatisfying runner-up?

Based on all of this, I’d narrow your list down to Angelie and Marlowe. They’re different from your older girls’ names, but somehow sound nicely compatible. And it sounds like you greater have hesitations around Francine and Solenne.

But I think the community may have more suggestions. And to help narrow things down, let’s include a poll, too – with all four names listed.

Over to you: what would you name a sister for Julia, Simone, and Calla?